A man was arrested this weekend after showing up in front of Taylor Swift's home, according to The New York Daily News. The 38-year-old man allegedly drove all the way from Colorado to Beverly Hills in hopes of meeting the Reputation singer. After searching the man's car and interviewing him, cops determined there was enough evidence to arrest him for felony stalking. The man is apparently still in custody.

This is the third person to be arrested recently for allegedly stalking Swift. Per TMZ, one man robbed a bank in hopes of impressing Swift and put some of the stolen money at her house in Rhode Island (it's unconfirmed whether he actually went to her house or not). Another man trespassed her home last month and was sentenced to three days in jail along with three years of probation. 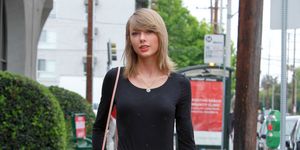 Taylor Swift Was Being Routinely Stalked by a Man
Rachel Epstein Editor Rachel Epstein is an editor at Marie Claire, where she writes and edits culture, politics, and lifestyle stories ranging from op-eds to profiles to ambitious packages.
This content is created and maintained by a third party, and imported onto this page to help users provide their email addresses. You may be able to find more information about this and similar content at piano.io
Advertisement - Continue Reading Below
More From Celebrity
Meghan Markle Might Not Ever Go Back to the UK
Are Angelina Jolie and The Weeknd Dating?
Advertisement - Continue Reading Below
Kate and Will Ate Burgers With Their Kids
Meghan Markle's Handbag Was a Nod to Diana
Ben Affleck and Jennifer Lopez Made Out in NYC
Lady Gaga Stunned in an Old Hollywood Look
Olivia Rodrigo Looked Jaw-Droppingly Beautiful
Will's "Alleged Bullying" Drove the Sussexes Out
Sam Asghari Opens Up About Britney Documentaries
Prince Harry’s Memoir Is Concerning Royal Insiders