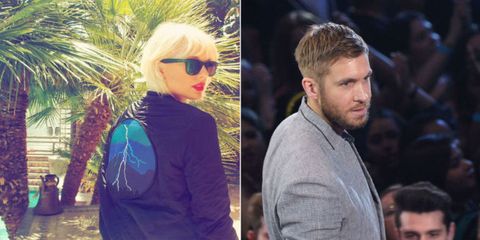 Figuring out why Taylor Swift and Calvin Harris broke up in the first place is sort of like Choose Your Own Adventure. While the ending is the same—they are broken up, period—how Tayvin got there is up for debate and depends on where the rumor or Instagram comment screenshot is from. The latest possible storyline comes from TMZ. Quoting people who claim to be "close" to Taylor, the site reports that Taylor originally had a writing credit on Calvin's summer hit with Rihanna, "This Is What You Came For." The song is also what started the downfall of Tayvin because of what happened next. According to TMZ sources, Taylor penned the song and sent a demo to Calvin when they were dating. They eventually recorded a full demo with Taylor on vocals (which could explain this other rumor that Taylor's voice is on the final recording).

TMZ reports that because both Taylor and Calvin thought it was a bad idea to collaborate as a fully-fledged couple, the song's writing credits appears as "Calvin Harris" and "Nils Sjoberg," Taylor's pseudonym. Here comes a twisty turn in Taylor and Calvin's relationship: on the same day as "This Is What You Came For" was released, Calvin told Ryan Seacrest in an interview that he and Taylor "haven't even spoken about" doing a collaboration. He also said, "I can't see it happening."

If song of the summer also means story of the summer, then "This Is What You Came For" has my vote. Thanks for this, Taylor/Nils.

This content is created and maintained by a third party, and imported onto this page to help users provide their email addresses. You may be able to find more information about this and similar content at piano.io
Advertisement - Continue Reading Below
More From Celebrity
Travis Covered His Ex' Name With Tattoo for Kourt
Kendall Jenner Wore a Bedazzled Pink Cowboy Hat
Advertisement - Continue Reading Below
Kourtney & Travis Will Def "Have a Baby Together"
Britney Is Done With "Rude, Humiliating" Family
Ben & Jen Are Meeting Up "Whenever Possible"
Anna Kendrick Looked Pretty in Pink at a Premiere
John Mulaney & Olivia Munn Might Split Up: Source
The Sussexes Worried Archie Would Attract Mockery
Diana Would Be "Thrilled" for Harry and Meghan
'Friends' Actor James Michael Tyler Has Died at 59