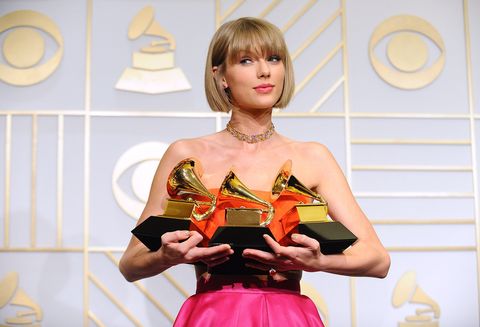 Less than a week after TMZ broke the news that Taylor Swift secretly wrote Calvin Harris and Rihanna's "This Is What You Came For" under the pseudonym Nils Sjoberg, Taylor has seemingly deleted her alter ego from existence. According to multiple sources, BMI's repertoire—a system which helps protect licenses for songwriters—was updated on Monday and Taylor Swift has officially replaced Nils Sjoberg as the song's co-writer. (Sorry, Nils.)

While Taylor had originally wanted to keep her involvement with "This Is What You Came For" a secret, after the news broke (and Calvin confirmed it with a mini Twitter rant), it looks like she's decided to get credit where credit is due. Maybe this even means she'll eventually release the demo she sent Calvin before he turned it into the club banger it is today.

Until then, I'll be trying to decipher which parts of the song Taylor sang by watching the music video on repeat.