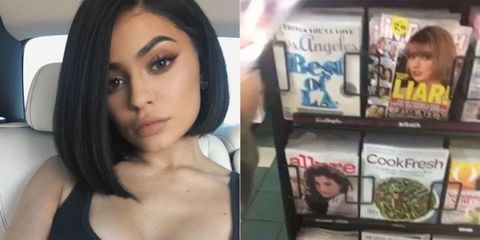 One week after everyone got invited to the #KimExposedTaylorParty, Kylie Jenner has hinted at whose side she's on via the magic of Snapchat. Her position is in line with every Kardashian-Jenner who has responded to the drama. Kylie's more like Kendall and less like Khloé in this instance, if you are to believe the intentions of this Snap and the magazine it focuses on while celebrating Kylie's Allure cover.

It's one thing to call Taylor Swift a liar in say, a magazine interview, and it's another to show the word in capital letters on social media. Still, Kylie's response is very Kylie. Recall, she shared this Instagram of her new Lip Kit color, "Exposed," shortly after Kim's epic Snapchat reveal of Taylor and Kanye West's "Famous" phone call.