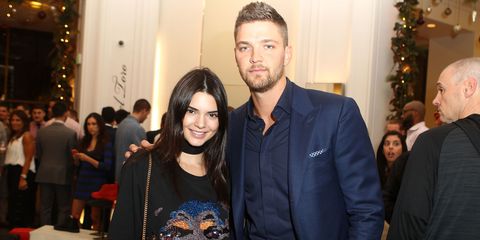 New year, new dating rumors. Kendall Jenner has sparked gossip of a rekindled romance after being spotted out with ex Chandler Parsons a couple of times this week. The model, 21, and the basketball player, 28, were previously linked in 2014 (they met because they had the same personal trainer), but recent sightings have people guessing if their fling is back on.

On Tuesday, the two reportedly "ran into each other" at a Bentley dealership in Beverly Hills.

Later that night, Jenner and her pal Hailey Baldwin watched Parsons' team, the Memphis Grizzlies, play the Lakers in LA. She was spotted making heart-shaped hand signals courtside, though it's unclear who they were aimed at.

After the game, the two reportedly had dinner—with Baldwin in tow—and went out clubbing together at the Delilah and 1 Oak in West Hollywood.

Jenner and Parsons make separate entrances at the Delilah.

Jenner was last dating rapper A$AP Rocky, whom she was romantically involved with since August. The fashionable pair were actually seen out on dates just last month. On New Year's, however, the model caused a stir when she was seen kissing Jordan Clarkson, another rumored love interest.

Parsons, on the other hand, was previously dating model Toni Garrn. The two split in November after over a year together.