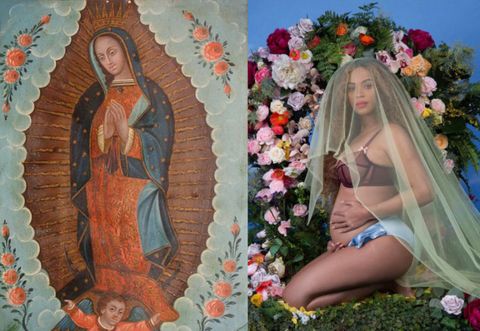 Nothing Beyoncé does is by accident. Every album release, photograph and interview is carefully orchestrated. So, when she posted a photograph on Instagram this week announcing that she and husband Jay Z are expecting twins, the world began analyzing each detail.

The vibrant portrait and the rest of the photoshoot, reportedly art directed by Los Angeles-based multimedia artist Awol Erizku, are chock-full of maternal and religious symbolism just begging to be interpreted.

We would like to share our love and happiness. We have been blessed two times over. We are incredibly grateful that our family will be growing by two, and we thank you for your well wishes. - The Carters

"Beyoncé's pregnancy announcement photos make a great many references to works of art, both famous and little known," explains Dennis Geronimus, Associate Professor and Chair of the Department of Art History at New York University. "Who can say if all of these references are entirely intentional, but Beyoncé and her photographer do seem to know their art history!"

The main image, in which Beyoncé is crouching in front of a wall of vibrant flowers in a green veil, is a clear reference to the Roman Catholic Patroness of Mexico and the Americas, the Virgin of Guadalupe. According to the Catholic Church, the Virgin Mary appeared as an apparition four times to Saint Juan Diego at the Hill of Tepeyac (now a part of Villa de Guadalupe, a suburb of Mexico City). She instructed Diego to bring her flowers, which he gathered in his cloak. When he presented the flowers (roses, to be exact) to the archbishop of Mexico City, the Virgin's image was imprinted on the cloak.

"If you want to talk to God, you go through her."

"She's venerated: If you want to talk to God, you go through her. The images that [Mexican artist José Guadalupe] Posada created come from a long line of religious illustration, and the Virgin of Guadalupe often has that blue background and greenish veil," says Jim Nikas, the Director of the Posada Art Foundation. "The Mexican people see her as the mother of everyone, not just the mother of God. Pretty clearly, the imagery there is a mom, who is Beyoncé. You could say she's likening herself to the mother of God, but I don't think that's the message so much as the joy of motherhood."

"It seems as though Beyoncé created a lot of this imagery to appeal to a Latin American market."

Nikas explains that in Mexican art, female saints are often depicted surrounded by vibrant flowers. And in many images of the Virgin of Guadalupe, she has a delicate bow around her waist—much like the pink bows on Beyoncé's bra.

"Flowers symbolize fertility; they're the sexual organ of the flowering plant. They're symbolic of virginity and the Virgin. The little bow around her waist is symbolic of her virginity as well," Nikas says. "The colors are clearly symbolic of royalty and some of the Aztec gods. It seems as though Beyoncé created a lot of this imagery to appeal to a Latin American market."

In addition to images of the Virgen de Guadalupe, many other cultures' Virgin Mary statues are framed with flowers—although the Virgin is never depicted as nude.

An image of the Virgin of Guadalupe at the Guadalupe Basilica in Antiguo Cuscatlan, El Salvador.

This isn't the first time Beyoncé has invoked the Virgin Mary: She walked down the aisle to Ave Maria, a Catholic prayer for the Virgin Mary, and even recorded a version of the song for her 2008 album I Am...Sasha Fierce.

Even the pregnancy portrait's caption hints at the religious undertones. She writes: "We would like to share our love and happiness. We have been blessed two times over."

The rest of the photoshoot, which was released Thursday morning on Instagram, features more shots of Beyoncé surrounded by flowers, along with images of her underwater and posing with her daughter, Blue Ivy. There are more religious, maternal and royal references.

In one portrait, Beyoncé stands nude with her hair flowing down to her waist in front of a mustard-yellow background. Flowers are painted onto her tights and she rises from a burst of greenery, invoking Sandro Botticelli's celebrated Birth of Venus. Geronimus, who specializes in Italian Renaissance art history, points out that her painted legs invoke Flora, the goddess of spring, featured in another Botticelli painting called Primavera. And Beyoncé stands next to the Egyptian bust of Queen Nefertiti.

"It's the unexpected fusions of different visual traditions and different genres, from devotional to mythological and allegorical imagery, that make the photographs especially striking," explains Geronimus. "She appears as not one but many women—or, instead, maybe the universal woman and mother—at once Virgin and Venus, Flora and Leda."

And really, would you expect anything less from Queen B?

Kate Storey Esquire Writer-at-Large Kate Storey is a Writer-at-Large for Esquire covering culture, politics, and style.
This content is created and maintained by a third party, and imported onto this page to help users provide their email addresses. You may be able to find more information about this and similar content at piano.io
Advertisement - Continue Reading Below
More From Celebrity
Michelle Obama + Phoebe Robinson = Serotonin Boost
Gwen and Blake Are Going Through a Rough Patch RN
Advertisement - Continue Reading Below
Screaming at Brad & Jen Reading This Steamy Scene
Gigi Hadid Shared Stunning New Baby Bump Photos
Chrissy Accidentally Revealed the Sex of Her Baby
A Brief History Lesson on Brad and Jen
Taylor Did Her Own Hair and Makeup for the ACMs
The Queen's Private Pain After Diana's Death
Lizzo Sent Cardi B the Sweetest Gift
Chrissy Got Super Candid About Pregnancy