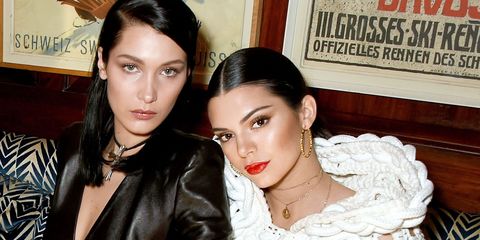 Kendall Jenner is the latest star to sit down with photographer Mario Testino for his new podcast series.

On her episode, the supermodel revealed a few secrets about her famous fashion friendships that most people probably don't know, including that she has actually been friends with Bella Hadid for longer than Gigi.

"Gigi and I just started getting close when we started modeling, but Bella and I were actually really good friends since high school, and hung out everyday in school before either of us started working," she told Testino.

"It's just funny because a lot of people don't know that Bella and I have been friends for like five or six years," she added.

Wait, what? This changes everything.

Although Jenner and Gigi came onto the scene at a similar time and shared many a catwalk moment together, the two haven't actually been friends for as long as Jenner and Bella, who have been photographed together much more frequently lately.

During the 10-minute chat, Testino also went on to give his take on the infamous supermodel debate which has been raging since Gigi, Jenner, and other social-media famous models came onto the scene.

This echoes what Jenner once said in defenxe of the criticism they were met with, when told Vanity Fair: 'We are the models of our time.'

Listen to the podcast in full below.

And there's us thinking Gigi and Kendall were the original BFFs.