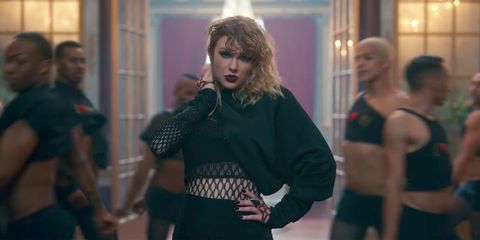 Remember his "I ♥ T.S." tank from last summer? Well, of course you do:

It was a meme-light of the summer for everyone―except of course for Hiddles himself, who probably didn't enjoy being the butt of all the jokes since, as he told GQ in a later interview, the whole thing was just a joke:

"The truth is, it was the Fourth of July and a public holiday and we were playing a game and I slipped and hurt my back. And I wanted to protect the graze from the sun and said, 'Does anyone have a T-shirt?' And one of her friends said, 'I've got this.' " The friend pulled out the "I ♥ T.S." tank top that Taylor's friends are contractually obligated to own. "And we all laughed about it. It was a joke."

So that's his statement on the entire relationship: an explanation of the tank top. "It was a joke," he repeats. "Among friends."

Anyway, if you'd thought you'd seen the end of the "I ♥ T.S." tank era, you thought wrong, for it appeared again on Taylor's backup dancers in the new video:

But are you surprised? It seems no one is safe in Taylor's reckoning... not even Old Taylor.

Sally Holmes Editor in Chief Sally is the Editor in Chief of Marie Claire where she oversees coverage of all the things the Marie Claire reader wants to know about, including politics, beauty, fashion, and celebs.
This content is created and maintained by a third party, and imported onto this page to help users provide their email addresses. You may be able to find more information about this and similar content at piano.io
Advertisement - Continue Reading Below
More From Video Music Awards 2020
Best Part of the 2020 VMAs? Lady Gaga's Mask Game
Miley Cyrus Recreated Her Wrecking Ball Moment
Advertisement - Continue Reading Below
Miley Cyrus Serves a Major Look at the 2020 VMAs
The Most Jaw-Dropping Looks on the VMAs Red Carpet
Everyone Dressed Down for the VMAs After-Party
Sophie T and T Swift Wanted a Camila/Shawn Kiss
Miley Cyrus' New Breakup Tattoo
Kaitlynn Carter Attended the VMAs with Miley
Bella and Gigi Hadid Both Are Blondes at the VMAs
Taylor Swift Calls Out the White House at VMAs