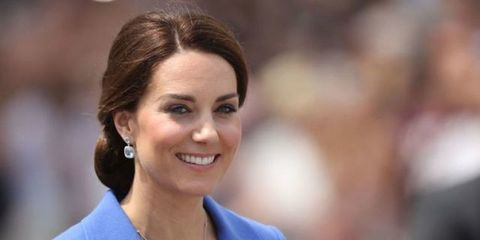 Ever since the Duchess of Cambridge and Prince William announced they were expecting their third child earlier this month, the mother of two has been on bed rest while she battles severe morning sickness.

But royal fans will be delighted to hear that Kate is expected to be well enough to make her first public appearance since her pregnancy news next month: It's just been announced that Kate will attend a reception on World Mental Health Day with William and Prince Harry at Buckingham Palace on October 10. 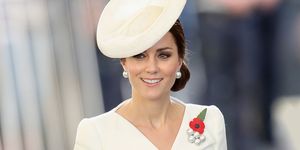 According to Kensington Palace, the event will recognize those working in the public health sectors, as well as giving them an platform to talk about their work and what more needs to be done to make mental health care a reality for people worldwide.

The Duke and Duchess of Cambridge and Prince Harry will attend a reception at Buckingham Palace on World Mental Health Day. pic.twitter.com/P7GLzF8l6V

— The Duke and Duchess of Cambridge (@KensingtonRoyal) September 20, 2017

Kate, William, and Harry will also be joined by guests from leading mental health organizations.

The royal trio are dedicated to bringing awareness to mental health and their campaign Heads Together, which aims to end the stigma surrounding mental health issues.

The reception on Tuesday 10 October will celebrate the contribution of those working in the mental health sector across the UK.

— The Duke and Duchess of Cambridge (@KensingtonRoyal) September 20, 2017

Earlier this week, the Duchess appeared in a video for the Anna Freud National Centre for Children and Families, in which children were encouraged to talk about their "big" and "small" feelings as part of the charity's new campaign,"You're never too young to talk mental health."

Kensington Palace confirmed the news Kate and William were expecting their third child earlier this month, adding that "the Queen and members of both families are delighted with the news."

The big question on our minds is what will she wear for her first public appearance since announcing she was pregnant. Place your bets now.

This content is created and maintained by a third party, and imported onto this page to help users provide their email addresses. You may be able to find more information about this and similar content at piano.io
Advertisement - Continue Reading Below
More From Celebrity
The Palace Just Subtly Shaded Prince Harry
Kristin Cavallari on Why She Divorced Jay Cutler
Advertisement - Continue Reading Below
Simone Biles Shows Off Sculpted Abs In Bikini Pic
Meghan Nailed Workwear Chic in a Brown Silk Shirt
Did Emma Stone Secretly Marry Fiancé Dave McCary?
Kate Wore a Necklace in Tribute to Her Children
Meghan and Harry Made a Rare TV Appearance
Kate Middleton Wore a Playful Fall Look
Halle Berry Stuns in a Backless Swimsuit
The Best Celebrity Halloween Costumes of All Time