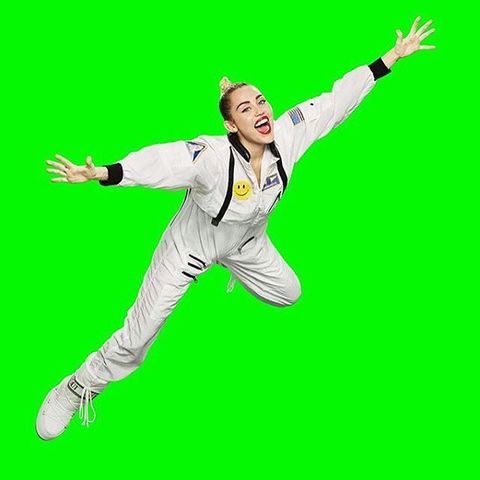 Miley Cyrus, known for her *wild* ways, was an obvious choice to host the ever-controversial MTV Video Music Awards. But the pop star's expectedly unexpected antics might still be censored...which kind of defeats the purpose, no?

"We have [planned] a lot of wide camera shots and a lot of audience reaction shows, VMAs executive producer Van Toffler tells Billboard. "And we have a delay so we're prepared for her."

While her penchant for being provocative will surely be celebrated tomorrow night, Toffler remains cautious—because he knows what kind of controversy the "We Can't Stop" singer is capable of. After all, he did produce Cyrus' 2013 twerk-a-thon heard 'round the world. You know, the one with Robin Thicke and that foam finger.

"There's a chance for anything," he explains. "She feels like the perfect host. She's that great marriage of music credibility, candor, she uses social media so well to express herself and she's provocative and chaotic and unpredictable, everything we want for this show."

We. Can't. Wait. And clearly, neither can Cyrus, who seems stoked for the star-studded seating chart. "Definitely bringin myyyy autograph book to DIS event!!," the 22-year-old wrote on Instagram, pointing to seats for Britney Spears and Kylie Jenner.

In addition to Spears and Jenner, celebs like Justin Bieber, Taylor Swift, Pharrell Williams, Rita Ora, Kelly Osbourne, Demi Lovato, Nick Jonas and Gigi Hadid are all confirmed see Cyrus in all her uncensored glory. Conversely, we'll be watching from home. Delay and all.