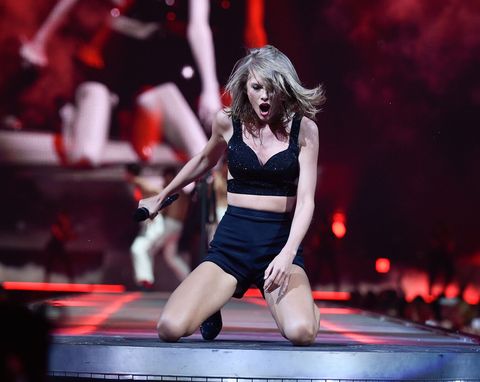 Well, this has to be pretty high up there on the list of Worst Nightmares for a Performer. While putting on her concert in Washington, D.C. last night, Taylor Swift got *stuck* on an elevated platform.

The singer had just finished bringing on a special guest—surprise, it was Lorde—and had moved to a different part of the stage before realizing it wasn't working properly.

That moment when Taylor Swift's set breaks down

"They just told me in my ear that I might be stuck up here forever," she told the crowd during her gig, according to E! News. "This thing is broken."

"I was just thinking about how I was singing a song about rain and it rained today…it's not that funny...We're just gonna have to re-choreograph the entire show," she continued. "It's fine. Whatever. It's gonna be a unique show D.C.!"

Thankfully they got her down swiftly (sorry/had to) and the show could go on.

Now, a look back at nicer times—AKA before the malfunction—when T-Swift and Lorde performed "Royals" together.