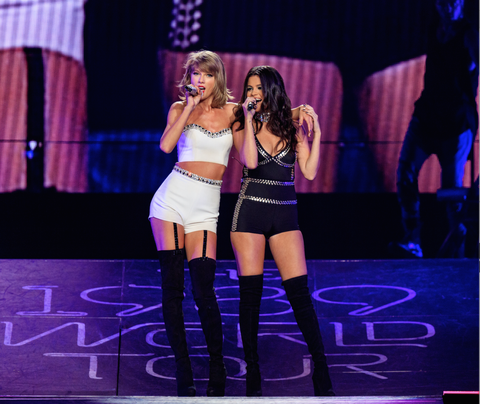 Yes. Correct. You are not misreading. Friends star Lisa Kudrow made an appearance as the beloved character—and then, because life is weird/great, settled in for a performance of "Smelly Cat."

"She's only ever played in coffee houses before," Swift told the crowd before bringing Kudrow née Buffay on the stage. "She's never played in a big venue like this. Please make her feel welcome."

Kudrow admitted last June that she had not performed that song since Friends ended. What better time than a Taylor Swift concert for a revival?

.@taylorswift13 got @LisaKudrow on stage to perform 'Smelly Cat' 😍😍 pic.twitter.com/F90IsokXcB

But the singer didn't stop there (clearly). She also brought onto the stage Selena Gomez to perform "Good For You" ("She is beautiful and funny and sweet and talented and intelligent and one of my best friends") and Justin Timberlake to perform "Mirrors" ("I don't even know where to start because anyone who knows me knows this is my favorite artist").

Side note: Can we get an app with Taylor Swift-generated compliments ASAP? Anyway, check out the snaps:

After nearly 8 years of friendship, I just can't wait to tell our kids we ACTUALLY got to perform in front of thousands of insanely beautiful people together. TWICE! I love you Tay. #bestnightEVER #whatISlife