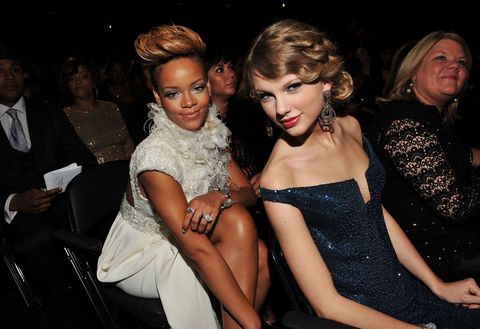 The paramilitary organization under Taylor Swift's leadership (known as S.Q.U.A.D.) has been heavily recruiting pretty much every celebrity who comes near a 1989 tour stop, but there's one who will never join them—not for all the hand-knit Polaroid sweaters in the world.

In an interview with NME (viaDigital Spy), Rihanna said that she and ultra-likeable Swift are about as different as Skittles and the Large Hadron Collider, meaning that if they were to combine, it would result in a pile of sugar dust blowing in the wind.

Giphy
Chelsea Peng I'm Chelsea Peng, the assistant editor at MarieClaire.com.
This content is created and maintained by a third party, and imported onto this page to help users provide their email addresses. You may be able to find more information about this and similar content at piano.io
Advertisement - Continue Reading Below
More From Celebrity
J.Lo Made Out With Ben on IG for Her 52nd Birthday
Are Will & Kate Sending a Message to Harry & Meg?
Advertisement - Continue Reading Below
Harry and Meghan Reportedly Have a Four-Book Deal
Naomi Osaka Lit the Olympic Cauldron in Tokyo
John Legend Performed "Imagine" for the Olympics
Simone Biles Is Honored With Her Own GOAT Emoji
Kate Winslet Reveals Her Favorite Red Carpet Look
Margot Robbie Had a Life-Size Cutout of John Cena
Jennifer Lopez and Ben Affleck Are IG Official
Celebs Share Their Emotional Infertility Stories