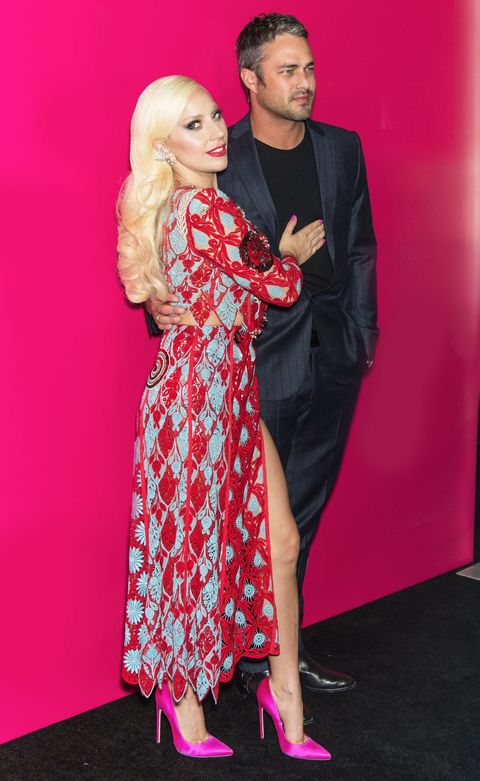 The anemic toddlers drinking O negative out of sippy cups were just for show, but Taylor Kinney and fiancée Lady Gaga are apparently ready for some actual little monsters of their own.

While promoting his new film Rock the Kasbah, the Chicago Fire actor compared the number of children he and Gaga plan to have to a sports team, perhaps forgetting that in association football, there are 10 field players and one goalkeeper.

"I have a bunch of brothers," the casual hander-outter of McQueen armadillo heels said in an interview with HuffPost Live. "I grew up with a big family…I want a brood, you know? I'd like to have a little soccer team and a minivan and all that stuff."

But for now, Gaga already has her hands full with her *figurative* babies American Horror Story and her fifth album, which Kinney said she's in the process of writing.

Chelsea Peng I'm Chelsea Peng, the assistant editor at MarieClaire.com.
This content is created and maintained by a third party, and imported onto this page to help users provide their email addresses. You may be able to find more information about this and similar content at piano.io
Advertisement - Continue Reading Below
More From Celebrity
The Queen Is Hopeful Prince Harry Will Return Home
Prince Charles Visits the Queen at Windsor Castle
Advertisement - Continue Reading Below
Harry & Meghan React to Prince Philip's Death
Will Harry & Meg Attend Prince Philip's Funeral?
Prince Philip Will Not Have a State Funeral
What 'The Crown' Got Wrong about Prince Philip
Touching Things Queen Has Said About Prince Philip
Your Guide to the Current Royal Line of Succession
Why Wasn't Prince Philip a King?
The World Reacts to the Death of Prince Philip