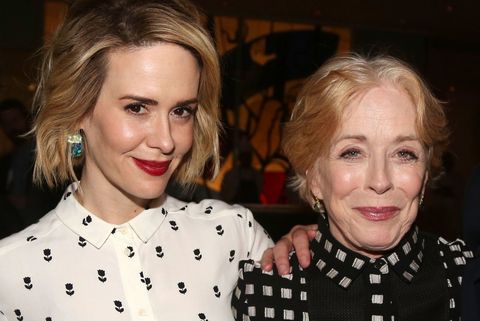 Holland Taylor, the cool law professor lady in Legally Blonde, recently made headlines when she nonchalantly revealed that she's in a deeply committed relationship with a woman on an episode of WNYC's Death, Sex, and Money podcast. She declined to name her partner, but according to People's sources, the previously unidentified younger woman is none other than actress Sarah Paulson.

"Given my generation it would not be something that would automatically occur to me," Taylor said of marriage on the podcast. "But as a symbol, as a pledge, as a plighting one's troth, it would be a wonderful thing to do."

Disappointingly, the news has been met with both ageist and homophobic responses, but that shouldn't bother Taylor, who also said, "I haven't come out because I am out. I live out."

Chelsea Peng I'm Chelsea Peng, the assistant editor at MarieClaire.com.
This content is created and maintained by a third party, and imported onto this page to help users provide their email addresses. You may be able to find more information about this and similar content at piano.io
Advertisement - Continue Reading Below
More From Celebrity
Why Will & Kate Wouldn't Hang Out With Harry
What Happens on Katie's Season?
Advertisement - Continue Reading Below
Katie Holmes' Gingham Dress is Summer Perfection
Ben Affleck Had a Sweet Father's Day Celebration
Selena Talked Being Mocked Over Her Mental Health
Olivia Wilde Was Asked About Harry Styles Romance
Gigi Shared the Sweetest Photo of Zayn and Khai
Meghan Shared the Cutest Update About Archie
Meghan's Heartfelt Father's Day Gift for Harry
Sophie Turner Shared a Sweet Unseen Pregnancy Snap