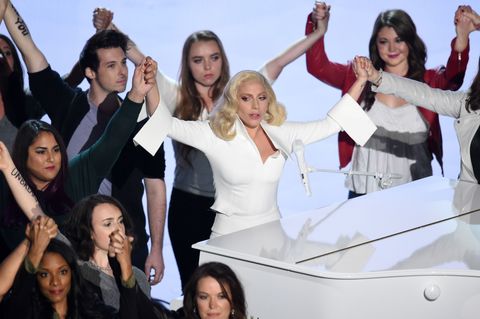 Lady Gaga is still feeling the effects of her powerful Oscars appearance, where she was joined on stage by 50 sexual assault survivors to perform "'Til It Happens to You." But just because the night is over, doesn't mean Gaga is simply moving on to the next thing. The singer took part in a group tattoo to honor the event, explaining that "at rehearsal the survivors and I made a pact."

The tattoo itself is a symbol of unity, which artist David Allen explains is "an image of solidarity for survivors of sexual assault."

While getting the tattoo, Gaga occupied herself by posting about sexual assault to Instagram, using the hashtags #FreeEveryWoman, #FreeEveryMan, and #FreeKesha.

Not to be cheesy, but is anyone else feeling monumentally touched and inspired by Gaga's dedication to such an important cause?