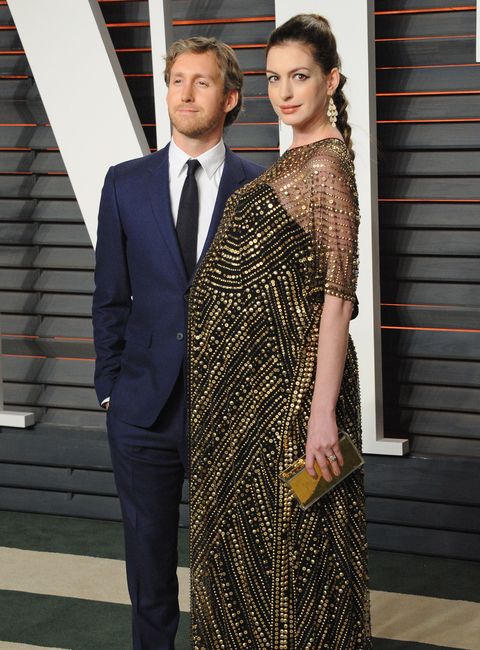 Anne Hathaway is officially a mom! The actress and her husband welcomed their first child, a baby boy named Jonathan Rosebanks Shulman, on March 24 in Los Angeles, according to E! News.

You may remember the badass way Hathaway debuted her baby bump back in January: with a bikini pic on her *own* terms.

Happy 2016 to my beautiful Instafriends! So, posting a bikini pic is a little out of character for me, but just now while I was at the beach I noticed I was being photographed. I figure if this kind of photo is going to be out in the world it should at least be an image that makes me happy (and be one that was taken with my consent. And with a filter :) Wishing you love, light and blessings for the year ahead! ⚡️🦄Annie🦄⚡️

A few weeks after that glorious Instagram, Hathaway glowed her way through her first pregnant red carpet appearance.

So if expectant Anne Hathaway is any indication, we eagerly await the way she chooses to introduce the little dude to the world.

Rosa Heyman Deputy Editor As Cosmopolitan’s deputy editor, Rosa Heyman oversees a team of whip-smart editors and hilarious writers who bring you some of the best investigations on the internet, from dissecting the latest Kardashian drama to uncovering the link between white supremacy and misogyny.
Advertisement - Continue Reading Below
More From Celebrity
Best Reactions to Brad and Jen's SAG Reunion
Brad Pitt Went to Jennifer Aniston's Holiday Party
Advertisement - Continue Reading Below
See Brad and Jen's SAG Awards Reunion
Brad Pitt Watched Jen's Speech Backstage
Brad Pitt Jokes That He Has a Tinder Profile
Jen Reacts to Brad's SAG Awards 2020 Speech
Why Charlize Theron Wore a Necklace in Her Hair
Sophie Turner Has Bambi Eyes For the SAG Awards
Prince Harry, Meghan Markle Could Be on The Crown
Harry Says Archie Just Saw Snow for the First Time