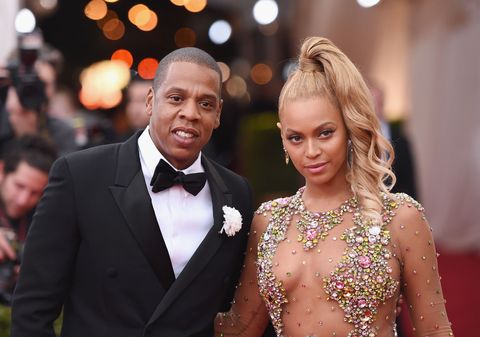 Despite Becky with the Good Hair infiltrating the most holy matrimony of our time, Beyoncé and Jay Z appear to have Lemonade'd their way through the ordeal. That said, the couple were spotted without their wedding rings shortly after the album's release, and the internet reacted in the way you'd expect. By doing the cyber equivalent of panicked flailing.

Well, everyone can get back in a relatively chill formation, because Bey and Jay were spotted getting pizza together in Florida. And as the proverb we just made up goes, the couple that gets a slice together is nice together. (Sorry.)

Fellow diners report that Beyoncé and Jay Z were joined by Tina Knowles at Miami's Lucali, and they looked "sweet, chill, and loving." In fact, one witness (read: Beyhive spy) said that "as soon as they came in, Jay sat right down next to Beyoncé and put his arm around her–he was protective of her."

Hashtag adorable. And also cute, they sang along to "Let's Get It On" when the song started playing in the restaurant.