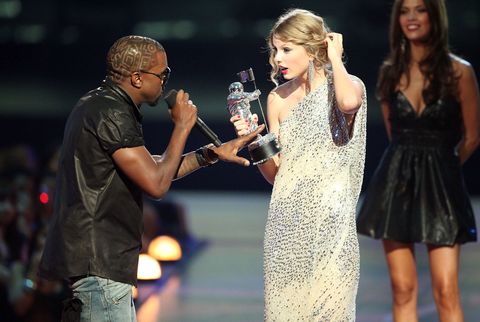 As we found out in 2009 when he interrupted Taylor Swift on stage, Kanye West has a lot of thoughts about the VMAs. Who knows what comes over him in the presence of that little Moonman, but he basically looses all chill. Which is why the VMAs are reportedly giving Kanye designated rant time. Honestly, anything to prevent this from happening again:

According to TMZ, the rapper will have a full four minutes to freestyle, perform, or just dish his thoughts. Basically, the VMAs are just like "Do you, 'Ye," and topics up for discussion presumably include Taylor Swift, Donald Trump, and Kanye's feelings about McDonalds. Because judging from that poem he wrote about evil french fries, he has a lot.

Either way, show producers have no idea what to expect, so send prayers to whatever nervous PA has the task of pushing the bleep button.