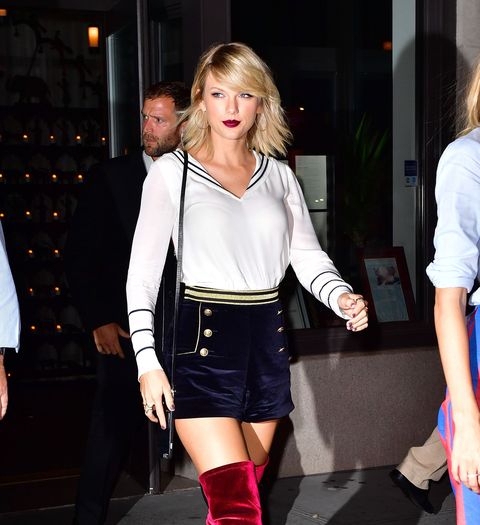 On next year's GMAT, there will be the question "At any given party, where could one find Taylor Swift?" The answer? Both A. (in the photo booth) and C. (on the dance floor with Mary J. Blige). That's what we call a freebie.

According to anonymous sources speaking to Us Weekly, Meredith Grey's keeper—but not friend—partied it up at Liberty Ross' 38th birthday party in L.A. on Saturday. "Gwyneth Paltrow was dancing with Taylor Swift and hanging out with her a lot," a source said. "They seemed like good friends. Taylor was in an amazing mood and very social."

A second source said Swift and Blige cut a rug with guests Pharrell, Tom Ford, Mick Jagger, Cindy Crawford, and Danny DeVito. Swift and Blige: The *True* How to Be Single Story.

Chelsea Peng I'm Chelsea Peng, the assistant editor at MarieClaire.com.
Advertisement - Continue Reading Below
More From Celebrity
Ben Affleck Is Blond Now
A Timeline of Charles and Diana's Relationship
Advertisement - Continue Reading Below
Kendall Jenner Wants to Work for Beyoncé
Harry & Jon Bon Jovi Sing Together at Royal Event
Khloé Kardashian Is Being Trolled Over Febreze
A 'Friends' Reunion Special Is Coming to HBO Max
Katie Holmes Is in Head-to-Toe Chloé at Their Show
Ariel Winter Now Has Strawberry Blonde Hair
46 Stars Who Dated Before They Were Famous
Every Easter Egg in Taylor Swift's 'The Man' Video