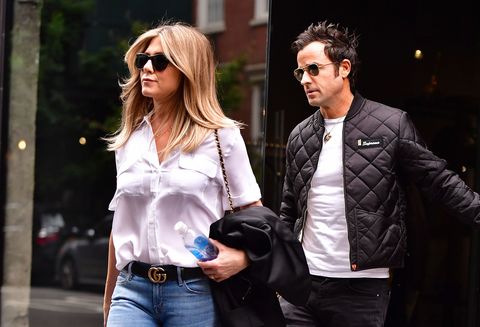 Seconds after the Angelina Jolie-Brad Pitt news broke, the Triumphant Jennifer Aniston memes started hitting the airwaves. Justin Theroux is having none of that, though, because he's too busy praising his wife for being the tough, poised lady she is. (Behind every great woman, you know.)

Literally: "[Jennifer] is a proper badass," he said while promoting Girl on the Train. "She has lived through a lot of bullshit. Many people would have crumbled under some of the stresses that have been put on her. I'm very proud of her for that, for the way she handles herself. In a weird way, it's an honor to stand behind her. Truly, in that sense, she's amazing."

Also highly impressive: how calm and collected Aniston seemed during her first post-bombshell-she's-not-even-really-involved-in appearance. And Theroux's eyebrows during the same outing. Bold.