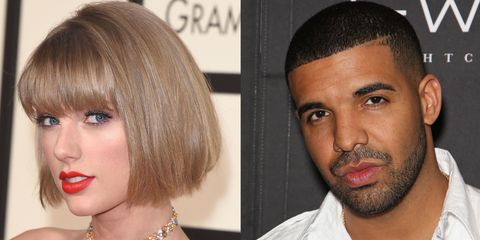 Remember when Taylor Swift showed up at Drake's birthday party and he introduced her to his mom, and then everyone assumed they were dating, and entire squad of confused shippers was born? Yeah, about that.

According to E!, Swift and Drake are simply collaborating on new music, and said music is reportedly "different" and "very catchy." Says an insider: "They've both been having a great time in the studio."

Swift is due to release an album any day/week/month now (it's been two years since 1989), and a collaboration with Drake would be completely amazing. Though it should be noted that he's is in an on-again/off-again relationship with Rihanna, who is best friends with Katy Perry, who is in an ongoing feud with Taylor Swift. So yeah, be on subtweet alert.