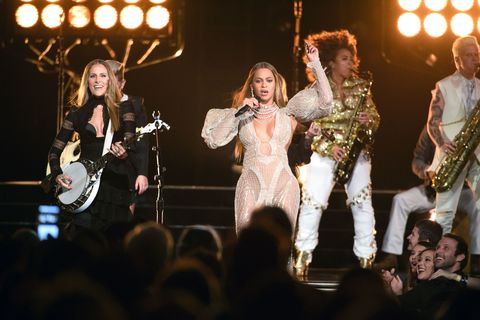 Yesterday, some eagle-eyed internet consumers noticed that the CMA Facebook paged had all but scrubbed any references to Beyoncé's epic performance of "Daddy Lessons" with the Dixie Chicks, which...yikes. The show had gotten a lot of (pretty racist) negative feedback for featuring Texas-born Beyoncé, but representatives claim this didn't influence their decision-making.

"CMA has not erased any mentions of Beyoncé's performance on the CMA Awards," the Country Music Association said in a statement. "In advance of the broadcast, CMA removed a five-second promotional clip from ABC.com and CMA's Facebook page. The promo was unapproved and CMA removed it prior to the broadcast. Beyoncé's performance with Dixie Chicks was a highlight of the evening and we are continuing to share the amazing full-length performance clip via our official social channels."

Either way, the Dixie Chicks didn't seem to appreciate the lack of support, and tweeted the following:

If we all turn this up really loud, together we can drown out the hate. https://t.co/PWJcDeNmuR

Not to take sides, but, Team Beyoncé Should Perform at Every Single Awards Show Ever the End.