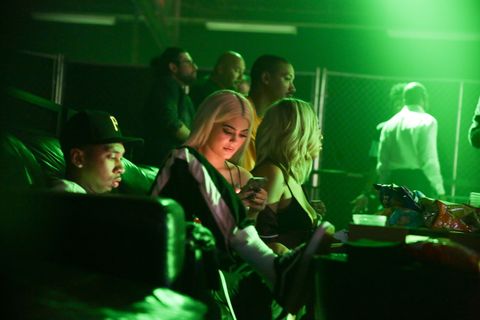 Upon discovery, most of us who had achieved the plot of The Lizzie McGuire Movie IRL would be like "Yes, 'twas I who impersonated my Italian pop-star twin Isabella at an inconceivable blowout show at the Colosseum, where I humiliated that fraud Paolo and had the living daylights auto-tuned out of my real voice." But Kylie Jenner, whom many believe to be the secret lead singer of Terror Jr, has denied, denied, denied the possibility.

ICYMI, the allegation the Yves Klein muse impersonator firmly refuted in a new Snapchat video was brought by sleuth-y fans who spotted Jenner's name in the rights for "3 Strikes," a track she also used to promote her "Glosses" music video.

However, apparently after mom Kris questioned her, Jenner put an end to the speculation. "Public announcement: I'm not the singer of Terror Jr or whatever [they're called]," she said. "I love their music, but for those wondering, it's not me, guys. It's not me. So yeah, I don't know if the band is trying to get a little attention or what's going on, but it's not me."

Chelsea Peng I'm Chelsea Peng, the assistant editor at MarieClaire.com.
This content is created and maintained by a third party, and imported onto this page to help users provide their email addresses. You may be able to find more information about this and similar content at piano.io
Advertisement - Continue Reading Below
More From Celebrity
Why Isn't Archie Mountbatten-Windsor a Prince?
A Body Language Expert on the Oprah Interview
Advertisement - Continue Reading Below
See an Adorable New Sussex Maternity Shoot Photo
Why Is the Royal Family Called "The Firm?"
Read Serena Williams' Statement on Oprah Interview
The Internet Reacts to Meghan and Harry Interview
Prince Harry: The Queen Was Advised Not to See Me
The Palace Had Concerns About Archie's Skin
Harry Says Racism Was "A Large Part" Of Leaving
Stacey Abrams on Her Election Wins & What's Next