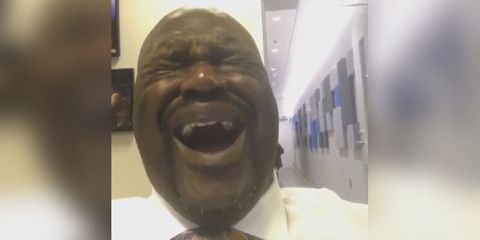 Everyone loves Beyoncé—even NBA Hall of Famer/star of '90s classic Kazaam, Shaquille O'Neal. The basketball legend posted an *emotional* video of himself lip syncing to "All Night," from Lemonade that proves that he's definitely in the Beyhive.

Dear Beyoncé this and HALO is my jam. I hope you win all the GRAMMYS pic.twitter.com/cEgGDI3fzP

Shaq's tweet comes after Bey was nominated for nine awards at the upcoming Grammys, which according to Time, makes her the most-nominated woman in Grammy history.

"Dear Beyoncé this and HALO is my jam. I hope you win all the GRAMMYS," he tweeted with the video, which, for the record, captures the emotion all Beyoncé fans feel every time her music plays.

Kayleigh Roberts Kayleigh Roberts is the weekend editor at Marie Claire, covering celebrity and entertainment news, from actual royals like Kate Middleton and Meghan Markle to Hollywood royalty, like Katie Holmes and Chrissy Teigen.
Advertisement - Continue Reading Below
More From Celebrity
Khloé Kardashian Is Being Trolled Over Febreze
A 'Friends' Reunion Special Is Coming to HBO Max
Advertisement - Continue Reading Below
Katie Holmes Is in Head-to-Toe Chloé at Their Show
Ariel Winter Now Has Strawberry Blonde Hair
46 Stars Who Dated Before They Were Famous
Every Easter Egg in Taylor Swift's 'The Man' Video
Kate Middleton Does Some Sports in $38 Sneakers
Sarah Hyland Defends Ariel Winter’s Dress on Insta
Prince Harry Wants to Go by Just "Harry" Now
Ashley Graham Talked Breast Pumping in an Uber