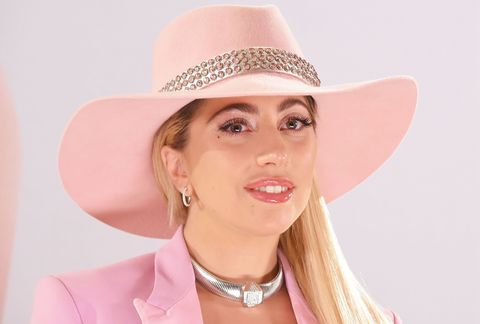 It's basically the most badass country music video we've ever seen. It starts off innocently enough, with Gaga playing the guitar in her now-signature pink cowboy suit, but it quickly transforms into a booze- and action-packed Wild West adventure. Think: Gaga yelling at a cowboy, lots of motorcycle and horseback riding, irresponsible car driving, and some dimly-lit dance numbers. There's also a pair of insanely high heeled boots that double as a machine gun, since this *is* Lady Gaga.

The video was directed by Jonas Åkerlund, who previously teamed up with Gaga on the Paparazzi and Telephone music videos. After teasing this video on social media and releasing it on Apple Music, the John Wayne video has made it's way to Gaga's Vevo account today. Enjoy: