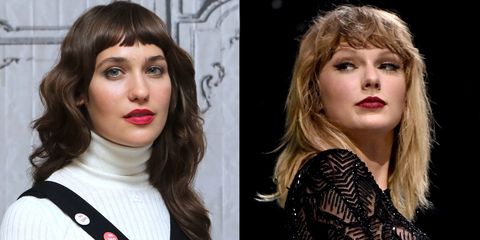 Other than posting a photo of herself voting, Taylor Swift remained staunchly apolitical throughout the election—and many people took issue with the fact that she chose not to use her platform to denounce Donald Trump.

Of course, Swift has the right to make her own decisions when it comes to her personal politics, and there's no obligation for celebrities to tell their fans who they voted for. But—in the age of Trump—the phrase "silence is compliance" gets thrown around for good reason, and Mozart in the Jungle star Lola Kirke just called Swift out for not using her platform.

"For me, it's really important to elevate voices and causes that don't get as much attention with whatever attention I get,"she said in a recent interview. "I totally understand why some people won't do that; I definitely think that there are certain celebrities who really could offer more help to grassroots movements with their power—and don't. Yeah, like Taylor fucking Swift, who may as well have voted for Trump, as far as I'm concerned, by not doing anything."

Kirke went on to say something we can surely all agree on—no matter where you come down on Swift's silence: "We can do something profound with these outlets and platforms. You can imbue everything you're doing with meaning."