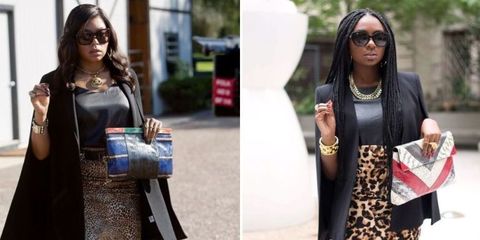 Like all good things, it started at brunch. It was a bitter January, before Empire even premiered and the idea that I would ever wear a leopard-print fedora was even a possibility. I was sitting in a restaurant, sipping my tea and absentmindedly checking my email, patting myself on the back for the biggest accomplishment of my life so far—going to two brunches on the same hungover Sunday morning—when a hiring editor at the New York Times magazine emailed me about a job opening. I choked on my tea.

Several weeks of interviews and edit tests followed, but through it all, I kept thinking, There's no way I'm going to get this job. Most of this anxiety was rooted in not looking and feeling the part: For one, I'm not a white dude. My career is relatively inchoate; my editing experience meager. I don't speak any other languages. I didn't go to an Ivy League...I can barely spell the word February. It seemed totally unlikely, so I forged ahead, practically insouciant, convinced I had nothing to lose because I didn't have much to offer.

Then, one afternoon in March, the editor-in-chief called me and offered me the job. He paused a little for dramatic effect; waiting for Ashton Kutcher to pop out, I did too. I finally gurgled some approximation of "thanks" in response, but what I really wanted to say was: "How dare you make me make such a life-altering decision on the day of the season finale of Empire?"

Empire is not a particularly good show—it's highly implausible, cloying, sometimes preachy—but it's an absolutely perfect one. I started in the middle of the first season, gobbling up each episode like the decadent treats they are until I was finally all caught up. I found at the center of the show, sweetest of all, there is—and forgive me for this—a pretty tough Cookie.

Taraji P. Henson's portrayal of Cookie is rich and luxurious, both out-of-this-world fabulous (she left jail in a cheetah dress and a fur, exactly what I want to be buried in) and around-the-corner familiar (every black person has a cousin called Cookie, for reasons we will never explain). Ever confident, Cookie's primary goal is to reclaim her space; her mission, known from the first episode, is: "I'm here to get what's mine."

I'm now six months into working at the Times—markedly less full of anxiety and ineptitude since day one, but despite working with the kindest and most attractive people in journalism, I'm still pretty uncomfortable. I love my job, but there are still days where I'm convinced I don't belong, racked with the fear that someone is going to find me out and show me the door. This is called impostor syndrome, which I know a lot about (I've even written about it): a state in which a person isn't able to accept their accomplishments, chalking up their success to luck or a mistake. But what I like to think I have is an enhanced impostor syndrome: a state in which a person goes, "No, I know about impostor syndrome, I've actually read the entire Wikipedia page, but this definitely isn't it. I actually am completely incompetent." (But that's just...impostor syndrome.) Either way, I figured: Hey, if Cookie can regain the space she'd lost, then maybe I can carve some space out for myself.

Dressing in Cookie's finest was a departure from my usual garb, what I like to call "background actress in a nonspecific media setting"—Warby Parkers, blazer, T-shirt, skinny jeans, Converse. I brought a pile of clothes home from Cosmopolitan.com HQ on a Friday night after warning my desk mate about my imminent new look. I began my Monday commute in piles of jewelry, a leopard-print skirt, and a leather shirt. People were mostly unimpressed by me on the train, but I was impressed by every woman who's ever gotten through an entire day in giant heels. My entire life flashed by, sad and pimply, through my 40 bar-holding minutes standing in platforms.

This is possibly the best photo ever taken of me in my life. I don't know how Kanye West wears a leather shirt every day. I'm schvitzing.

I stumbled to my desk. My coworkers noticed my new look immediately: tuts of approval, questions about where I bought everything. But on the second day, when I arrived in the leopard-print dress, bag, and precariously cocked hat, I had to come clean: I was doing this for an article. None of the clothes were mine. Yes, the shoes really f–king hurt.

Without fail, I tried to whip around dramatically in my chair any time someone even LOOKED at me when wearing this outfit. I only sort of fell.

The questions multiplied, my coworkers and friends tickled by my new look. But chief of all, I was asked: "Do you feel any different?"

The night I got the clothes, I watched some back episodes of Empire; the Lyon family, blessed as they are with vices and good looks, are united primarily because of Cookie. At her surface, she's a nettlesome ex-wife and mother stomping back into the lives of people who managed to forget her; in truth, she's resilient but terrified, attempting to regain what she founded (the record company) without diluting the cohesion of what she created (her family). But most of all: She's brave.

Your girl in the leather pants, however, was not. "I feel really self-conscious," I confessed to a colleague when she asked. I didn't feel more powerful or cocksure or fabulous or Cookie-esque at all. I felt garish and ostentatious. I was happy to relay the ridiculous details of my assignment, quick to admit that I was playing a part, but when it came time to be myself—to speak up in a meeting or run up to the cafeteria alone—it was like all the progress I'd made in the past six months to overcome my insecurities was gone.

I wore these shoes to a bar later that day and my feet swelled up so much that they wouldn't fit in the shoes and my boyfriend had to carry me home. Moral of the story: Don't ever leave your house.

It's important to note, here and everywhere, that I'm a black woman. "Ghetto" is a word that most conversations about Empire have managed to dance around, but it kept rattling in my head that week. Say you're writing a TV show, and you have a woman who knows what she deserves, who takes great care in her appearance and doesn't take shit from anybody, and she'd probably be described as powerful, independent, trailblazing. Now make her black: She's vivacious, or the kiss of death, "sassy." Now dress her in leopard prints and giant rings? She's "ghetto." It's easy to distance yourself from the connotations of Cookie when she's on your TV—she's a character—but what happens when she's in your face? My exterior now telegraphed something totally different from my norm, and I didn't quite know how to deal with it. Everyone I knew treated me the same—I'd smack them if they hadn't, a Cookie trait I was born with—but I could feel strangers reading me differently.

The day I wore the leopard-print fedora and dress, I noticed a man giving me a strange look. I'm a woman and I'm alive, so men give me weird looks all the time, but this one was pointed and full of surprise, cast my way as I was walking into the building. The New York Times office is on Eighth Avenue, the only stately thing in the neighborhood; subtle but formidable, a place where Big Things Happen. The man soaked up the sight before him—a flamboyantly dressed black woman clomping her way into the hallowed halls of the Gray Lady—and his look asked, "Who are you to be here?" It was the same question I'd been asking myself since I started.

Dressing like Cookie for five days wasn't the secret elixir to my anxieties, but here's what I learned: How to say "f–k you." I didn't say it to the sidewalk man—I'm a lady, for goodness' sake, I work at the New York Times—but I started saying it to anyone who had wronged me that week (street catcallers, people who entered the subway before I exited, men), which meant I had to say it to myself. This is Self-Improvement 101: One of the first steps to solving a problem is to figure out who is causing it, and sometimes that person is you. I was angry with myself: for psyching myself out, for convincing myself that I didn't belong in a place that had welcomed me with open arms, for wasting time meandering instead of improving, for not just learning how to spell the word February. So I did it: F–k you, self, for being so goddamned scared. No one can improve the situation at hand more than you. No one knows this more, at least on Fox's Wednesday night lineup, than Cookie.

I wore this to the New Yorker Festival, and the editor of the magazine, David Remnick, arrived wearing the same thing. Totally embarrassing.

From then on, the challenge was just a fun game of What I Would Wear if I Were Rich and Ridiculous? I got to carry a purse worth more than my couch. I wore a fur coat to brunch and got to text the words "I am wearing a fur coat to brunch." I took more selfies than I have all year. I started a group text with all my closest female friends, sending them each day's outfit before I left the house, their praise, emoji-laden and sweet, pushing me out onto the street, holding me up.

When I told that coworker that I felt foolish and gaudy in my clothes, she was surprised. "I think you look amazing," she told me. "Like you could get anything you ever wanted." You just have to believe.

I don't make the rules, but when you have a fur coat in your possession, you have to lounge around wearing nothing but it and your fanciest underwear. Also, I'm really glad I didn't know this coat costs $4,000.

You can't see it here, but my butt in this dress likely classifies as a work of art. If I actually achieved something with my life and then had to be rendered as a wax figure so people could take selfies with me while the real me was off accomplishing real things, I'd want to wear this dress.

This is the best my boobs have ever looked.

Jazmine Hughes is an associate editor at the New York Times magazine. She feels better every day.

The above photos were taken over the course of one shoot in or around Cosmopolitan.com HQ. Makeup by Lauren Lebowitz for Glamsquad.