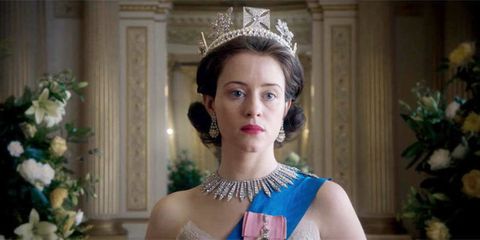 The first trailer for Netflix's The Crown is here, and we're already obsessed.

Netflix's upcoming drama—rumored to have cost around $156 million—centers on Queen Elizabeth II's (Claire Foy) dramatic early years on the British throne. Beginning in 1947, six years prior to her coronation, the ten-episode first season will chronicle Elizabeth's marriage to Prince Philip (Matt Smith), the untimely death of her father King George VI, and her experience as the 25-year-old queen of a post-war Britain.

The show is created and written by Peter Morgan, who famously explored a later portion of Elizabeth's reign in 2005 movie The Queen, for which Helen Mirren won an Oscar. Netflix reportedly has a six-year plan for the show, which may recast its central roles as necessary as its timeline progresses.

Between this and Gilmore Girls: A Year In The Life, you might as well say RIP to your November social life right now.