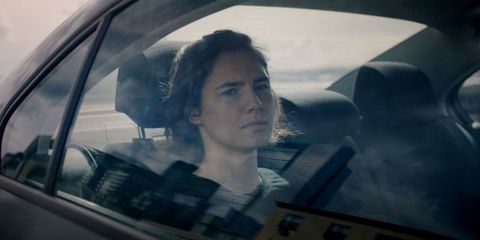 If the Amanda Knox saga doesn't scare the shit out of you, then congratulations: You are either content living inside your cozy bubble of denial, or you don't know the story. If the reason is the latter, then you're in luck. The Netflix Original documentary, Amanda Knox, is coming September 30.

The documentary tracks how Amanda Knox was found guilty for the murder of Meredith Kercher, her roommate in the Italian city of Perugia—and the trial by media that also occurred.

Through interviews with several people—like Knox herself, one of the journalists who covered the case, and the Italian prosecutor—we're able to piece together how the cacophonous fervor surrounding the case led to a miscarriage of justice. The whole thing seems so fantastical that it has all the makings of a work of fiction.

Here are the people at the center of the case, the roles they played, and why each is an important part of the story.

The documentary takes us through the media's brazen vilification of Knox and her poor treatment elsewhere; as just one example, while waiting for her trial, Knox was falsely told by prison officials that she had HIV as a tactic to break her, and that information was also released to the media. HIV!

Her direct-to-camera interviews and opining here come across as rehearsed and cold, and don't really help us warm to her—just as her kissing her boyfriend, Raffaele Sollecito, outside the crime scene didn't help the public believe in her innocence. But these kinds of stupid actions, which greatly contributed to the conviction of others that she was involved, are things I can imagine having done myself in my early twenties, so it's hard not to empathize with her.

Amanda Knox in the Netflix documentary

Mignini, the Italian public prosecutor who focused his attention so fiercely on Knox and Sollecito in the case, is a character straight out of a Spaghetti Western. It could be argued that by directing blame away from the actual killer (more on him in a minute), Mignini is partially responsible for the terrifyingly light sentence eventually given to the man who was a much more likely fit for the murder. At the outset of the documentary, Mignini vehemently believes in Knox's guilt, but slowly becomes less confident as his interviews progress. His slow cracking is an interesting thing to observe: it's like watching the emperor lose his clothes, piece by piece.

Giuliano Mignini at the appeal hearing in 2011

Police zeroed in on Guede after finding his bloody fingerprints at the crime scene. He initially insisted that Knox had nothing to do with the crime, but his story changed once he was in custody and realized the severity of his situation. Based on the evidence, Guede was no stretch for the crime. He was also known to local police for breaking and entering, and it was easy to conclude he broke into the students' home with the intent to steal, accidentally ran into the victim, and escalated to rape and murder.

Guede opted for a "fast-track trial"—under Italian law, a defendant is able to elect to receive their sentence after only a preliminary hearing rather than going through a full trial. Because he is giving up some of his rights, he is rewarded with a shorter sentence if found guilty—which is what happened for Guede. But this makes us wonder what would have happened if an actual trial, one that would allow all evidence to be more thoroughly examined, had been held. Could Knox have been exonerated more conclusively? Instead, Guede was able to cast doubt on the idea that he was the sole person responsible for the murder by blaming Knox and Sollecito, and when his "guilty" verdict was handed down, his prison sentence was lenient at best.

The Mindless Mob: The Media

Interviews with journalist Nick Pisa also appear throughout Amanda Knox. Pisa was a major player in the media distortion that helped convince the public, and court, of Knox's guilt. Bragging that he was able to get hold of Knox's prison diary and that he trawled social media to reveal the nickname "Foxy Knoxy" (a once playful tag that became fuel for the media's depiction of Knox as a sex-obsessed deviant), he gives the impression that these headlines were the endgame, not the story.

At one point in the documentary, Pisa offers up the excuse that fact-checking inflammatory information would have been too much of a burden; the slightest digging into the credibility of the information and—"I've lost a scoop," he reasons. Journalistic integrity be damned! He got to break the big "Amanda Has HIV!" story, didn't he? Who cares if it wasn't true?

Lost in all this insanity is the woman who, sadly, became a background player in her own murder.

Lost in all this insanity is the woman who, sadly, became a background player in her own murder. Twenty-one-year-old Meredith Kercher was living in Perugia as an exchange student, and had met Knox, her new roommate, shortly before her death. Whether she was targeted or in the wrong place at the wrong time, her death was overshadowed by the circus that surrounded it. Kercher's bloody foot peeking out from underneath a blanket gets more screen time than her actual face in the documentary.

Amanda Knox is an eye-opening example of the injustice that can occur when the media and criminal justice system work in tandem to condemn a person based on shaky evidence. The documentary exposes how frighteningly easy it could be to find yourself in Knox's shoes. There really are no winners here...except for Rudy Guede. He is currently being given day releases after just nine years of prison.