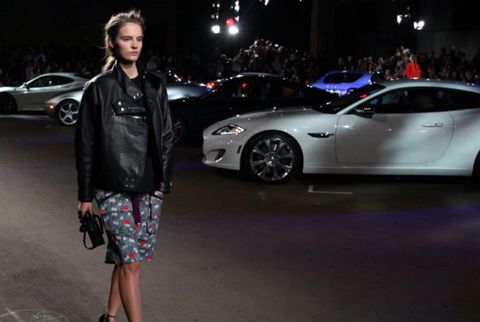 The fashion set knows that during Fashion Week (#NYFW), you pull out all the stops: hair done, makeup on, outfit perfected. And after you step into your 120's, the last thing you want to do is hoof it from one show to the next, especially when you realize that competition for cabs is just as fierce as some of this season's greatest runway looks. This is why someone brilliant invented the car service.

At #NYFW, it's not just show attendees who like to arrive in style. Designer Prabal Gurung used several Bentleys (follow @wobentley) to get to and from his Spring/Summer 2014 runway show.

And who can blame him? The entire experience is white-glove service from beginning to end. As a matter of fact, Marie Claire Digital Director Deanne Kaczerski tried to get her Flying Spur (@flyingspur) driver to provide specifics on who he's chauffeured around. "Due to confidentiality agreements both here and internationally, I'm unable to provide you with those details," said her driver Tony. Classy.

Interior: The leather is sourced from cow herds in Northern Europe and are chosen for the area's lack of barbed-wire fences and warble flies, so the leather has no marks.

Hours to Make: It takes 159 man hours to build the Flying Spur from start to finish; to cut, sew, build and trim on complete set of seats takes 30 hours; 12 seamstresses work to produce the seats in the leather shop. Between them they have over 360 years of experience

In the Details: Each leaf of wood veneer can be traced back to the tree it came from; Bentley is the only coachbuilder to use mirror patterns when applying veneer, placing four successive leaves end to end to make a symmetrical pattern across the fascia – a process known as book matching.

Advertisement - Continue Reading Below
More From Fashion
We Found the Best Modest Swimsuits for Summer
Fashion Comes Together to Fight Coronavirus
Advertisement - Continue Reading Below
Your Official Guide to the Royal Family's Tiaras
20 Women-Owned Small Fashion Brands We Love
Everlane Is Having a Sale on Its Coziest Clothing
All the Different Ways to Wear a Floral Skirt
Yes, You Need a Pencil Skirt
Anthropologie’s WFH Edit Is 40% Off Right Now
52 Celebrities Who Mastered ﻿'80s Fashion
Shop Adidas' Sale for Cute Home Workout Outfits