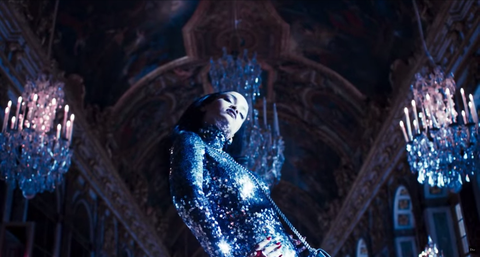 Update, 5/26: Dior has released the full, four-minute ad and it's essentially a music video, featuring the song in its entirety and RiRi strutting down the chandelier-adorned halls of Versailles, running away in a long, red gown, and wistfully staring out yonder. Watch it, below:

Original Post, 5/19: When it comes to collaborations, it's tough to top Beyoncé and Nicki Minaj, but Rihanna, with a little help from Florence + the Machine? Now that's what dreams are made of.

To soundtrack her upcoming Dior campaign, she has unveiled a teaser for her new song, "Only If for a Night," which sample's Flo's song of the same name. And suffice it to say, the combination is deliciously-dark magic. The track will appear on RiRi's forthcoming eighth studio album, which is expected to be released later this year.

Watch the Barbadian bombshell slink through the Palace of Versailles in a liquid silver gown to the goth-y, bass-heavy instrumentals like it's NBD, below: