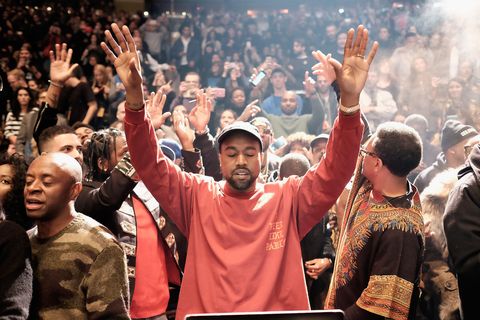 Backstage at any fashion show, you'll likely find a big piece of poster board on which the designer's directions to the models are written. Customarily, it's like "YOU ARE A GODDESS" or "STRONG AND CONFIDENT LIKE A KHALEESI," but not for Kanye. No—it's RBF or nothing for Kanye.

Adding to the overall dystopian-ragamuffin vibe, Yeezy's alleged show notes, which have been making the rounds on social media, were equally as bleak, instructing the models not to smile, dance, move too quickly, move too slowly, move except to shift their weight, look at the camera, be sexy, be cool, or do anything that might inspire others around them to break concentration.

"do not act cool"

"welp no problem there" pic.twitter.com/YHNqpzhESt

Now here's what that looks like in practice, taking into account that the spectacle lasted approximately 1.5 excruciating hours.

You know what would have been easier on everyone? Mannequins. They're doing wonderful things with plastic these days.