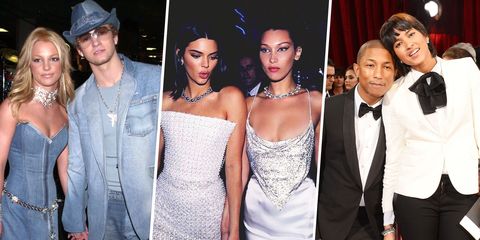 Instead of pulling a Naomi Campbell (i.e., showing up to community service in silver Dolce & Gabbana), why not plan it all out with the crew beforehand? These 20 celebrity friends did, and look how well matching worked for them. Told you a more cohesive aesthetic was the new clashing.

The couple that wears gray suits together...

Stays together at least longer than one that goes for silky army green.

Here, vaguely '90s-ish bling at Cannes, which falls right in line with Bella Hadid's plan to take over the world.

For all their later troubles, navy travel outfits presented a united front.

As can in-your-face boho.

Other pairs do baseball jackets...

While others do double-breasted suiting...

Or tones of throw-up.

Another declaration of coupledom...

And yet another, via his and hers tuxes.

Versus his and hers graphic T-shirts.

So much suiting, here with a sweet head tilt.

Or when his suit picks up a color in her dress.

Twinning, down to the sneakers.

And red-carpet denim for all time.

And club outfits for day.

And Rodarte and Gucci sequins, together at last.