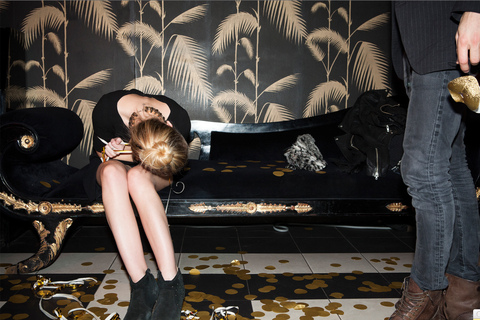 In an ideal world, I could drink wine like water and wake up the next day feeling like I'd just slept 12 sober hours. (Wouldn't that be the life?!) But in reality, my hangovers have gotten substantially worse since my college days, no matter what I drink.

To answer my prayers, a publicist recently suggested I try "hangover-proof" wine, and I couldn't say "yes!" fast enough. Technically billed as "low-histamine" wine, Veglio Michelino & Figlio's Barbera d'Alba and Dolcetto d'Alba wines are designed for people who are sensitive to histamines, a compound that naturally occurs in grapes and can cause headaches, nausea, and other symptoms of inflammation.

Now I don't have a histamine intolerance, so far as I know. But I was told this wine would not cause a hangover regardless, and I desperately wanted that to be true. So I hit the bottle before I checked the facts, meeting my BFF at our favorite hole-in-the-wall BYO restaurant bearing two bottles of the special stuff — one for each of us, like the old days!

We broke into bottle number one with classy pours like this:

What? When your goal is to house an entire bottle of wine, there's no reason to hold back.

As you might expect, things got plenty rowdy pretty fast — we were easily the loudest guests in the pint-size restaurant. The buzz was great, and FWIW, the whole idea of low-histamine wine did check out for its intended audience: My BFF typically reacts to red wine, but didn't get a headache or hives as per usual — at least according to the note (an interview attempt?) I found on my phone the next day:

Taking notes was my smartest idea of the evening: Despite knowing full well that I had a 7 a.m. spin class and work the next day, the promise of a pain-free morning made me feel *~iNvInCiBlE~*. After paying the bill, I split the dregs of the second bottle between our two glasses, and chugged mine for the road. Defying common sense, I parted ways with my friend and embarked on a 2.5-mile walk home (a completely unnecessary and potentially unsafe stunt to pull off at 11 p.m. in Manhattan, where I could have just as easily hailed a cab). It wasn't until I drunk dialed my boyfriend, who was almost more concerned than amused, that I started to wonder pray that I wasn't being punked with this whole hangover-free nonsense. Of course it was too late to entertain the thought, so instead, I pulled over for a frozen yogurt pit stop at 16 Handles. Besides stumbling into the toppings bar as I approached the register, I don't remember many more details.

I ultimately ended up in my own bed, where a hot flash woke me up around 4 a.m. I was somewhere between still drunk and insanely hungover, according to my self-assessment. As I staggered toward the window to crack it open, it became very clear that even low-histamine wine can seriously fuck you up — and wishful thinking won't begin to cure the consequences. As I learned from writing many, many, many articles on alcohol, and simply refused to accept: Hangovers result from drinking too much alcohol, not too many histamines. Guess I shouldn't have bought the publicist's bogus claim: I mean, it blatantly defies science.

I paid for my not-so-rookie mistake with every hangover symptom in the book (except for vomiting). Besides the early morning sweats and lack of restful sleep, I suffered from nausea, a pounding headache, tremors, stomach pains, and irritability. And because Passover was the day after my drunkfest, I also suffered through three-hour service and holiday meal at my sister's in-laws' place — a punishment in and of itself, because I had to sit upright and socialize when I really wanted to curl up in fetal position under the table. (My sister, who knows me to be a lush in such situations, even tried convincing my end of the table that I declined wine because I was pregnant. Luckily, they didn't buy it — but I still couldn't fully enjoy my company and the holiday.)

A full night's rest later, I still wasn't feeling entirely like myself, probably because the heavy drinking messed with my immune system: Within three days, I got some sort of flu. And a week later, I'm still never drinking again (aka for a while) — unless it involves some sort of magical potion in my no-hangover fantasyland. Even then? I'd probably opt for water.

TL;DR: There's no such thing as hangover-proof wine, unless the bottle reads "low alcohol." Even so, save yourself.

How to Get Rid of Your Hangover in Time for Work

10 Expert Tips to Hack Your Hangover