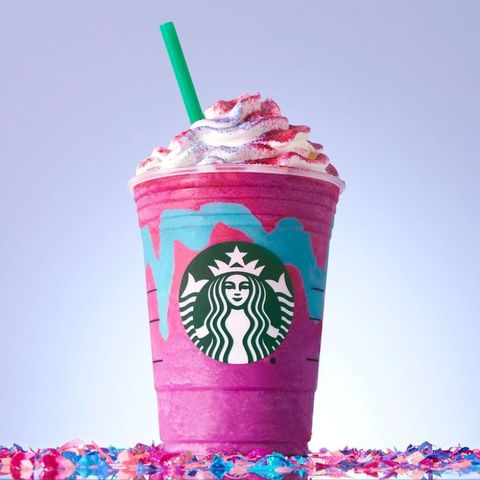 Unicorns (sadly) do not exist, but Unicorn Frappuccinos do. Last week rumors floated around on social media that the magical drink might be coming to Starbucks, and the company has finally confirmed its release. TBH, it's even more magical than it seemed.

Made with pink powder that's blended into a crème Frapp with mango syrup, it's layered with a sour blue powder topping.

Now, for the real ~*MaGiC*~, the Unicorn Frappuccino starts as a purple beverage with swirls of blue and a fruity and sweet taste, but once you give it a stir, it turns pink, and the flavor evolves to tangy and tart.

The sparkly drink will only be available from April 19 to April 23 while supplies last, so sprint to Starbucks immediately, probably?!?!

Those lucky enough to have had an early taste of the treat have been posting pictures to Instagram, and it's so damn pretty.

🦄YES!!!! UNICORN FRAPPUCCINO!🦄 Thanks @liarsenic3 for showing off your GORGEOUS @starbucks frappuccino!! I totally need to get some for the twins and I!! 🦄🦄🦄🦄🦄🦄🦄🦄🦄🦄🦄🦄🦄🦄🦄🦄 #foodietwin #foodies #dessert #foodporn #foodcoma #foodstagram #lovefood #cake_cookies_chocolate #dessertlover #dessertporn #forkyeah#follow #yummy #tasty#like4like#tastyfood #dessertlove#desserttime#mecookmeeat#eater#dailyfoodfeed#foodintheair#foodielife#instadessert#cheatday#unicorn#unicornfrappuccino#starbucks#rainbow#unicorns

Of course I got the unicorn frappuccino 🦄💖✨

A post shared by Starbucks Scarsdale Train Stn. (@starbucksscarsdaletrainstation) on Apr 18, 2017 at 2:34am PDT

In their press release, Starbucks wrote, "Once only found in enchanted forests, unicorns have been popping up in social media with shimmering unicorn-themed food and drinks. Now Starbucks is taking the trend to the new level."

Shoutout to Starbucks for creating a drink that's Secret Menu Worthy and offering it directly on its menu. The company is catching on to our unicorn food obsession and do-it-for-the-Insta ways.