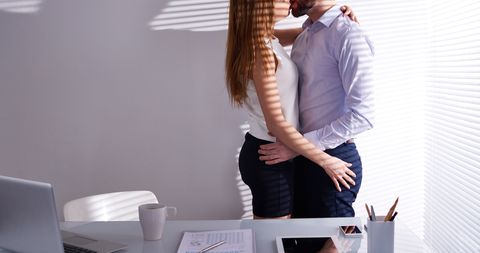 Hookups at the office aren't exactly "HR-approved," so it's a marvel how some couples manage to squeeze in a steamy sex session within the confines of a buttoned-up work environment. Below, eight brave souls recount stories of times they either engaged in or witnessed intense desk-side romps—behind closed doors and even within plain sight (yes, really).

"I went to meet my boyfriend at his office on New Year's Eve. No one was there, so I suggested we take advantage of the moment. He wasn't really into the idea at first, but I managed to convince him that if we turned off all the lights, no one would be able to see us (even if his floor was being monitored by a security camera). To this day, I have no idea whether or not I was right about that!" —Michelle

"I met an attractive guy at a bar and ended up sleeping with him on the second date. The sex was great...but he also tried to initiate anal sex a few times throughout the course of night, despite me asking him to stop. Long story short, it made me never want to see him again. The cherry on top of that bad experience? The next morning he asked if my office had a gym. When I told him 'yes' he explained that he was asking because he wanted to f*ck me in it later that afternoon (???). I told him 'no' and, needless to say, never saw him again." —Dana

Keys to the old castle

"When I first started dating my boyfriend, we were walking back from a nighttime stroll in the park when he mentioned that his former office was located in the area (he had just switched jobs) and that he somehow still had a key to the premises. He led me upstairs under the pretenses of showing off the space, but what was a casual walk-through turned into an abrupt rendezvous. No space was sacred...we fooled around on his old desk, the mid-level cabinets, the back wall. The whole time I kept expecting one of his old colleagues to walk in (though he swore there were no security cameras), so we ended up leaving to find a more private place." —Leah

Colleagues with a cause

"We were working on the same political campaign for 15-hour days, seven days a week, so we were always around each other. But we were just friends. Then she asked me if I wanted to 'relax' with her for a bit. She made it sound like a business arrangement. We closed the door to a rarely-used office and went down on each other up against the wall. We hooked up one more time after that, but decided to be luxurious and checked into a hotel instead." —Seth

"I was running a non-profit in Washington D.C. and was on the outs with my on-again off-again girlfriend. We had just had drinks and decided we were on again as we were walking by my office. I told her I had to get something inside, then closed the door of my office behind me and we went at it on my desk…and then in my desk chair. It was probably the best sex we ever had." —Dan

"Full disclosure: It wasn't me having the sex. But when I worked in Times Square, everyone in my office suddenly started squealing and pressing themselves up against the window one day, and when I went over to see what all the fuss was about, it was a couple in the office across the street from us...having sex. It lasted a full 10 minutes, which we of course watched every second of. At one point when they were going at it doggy-style, he *CHECKED HIS PHONE.* Anyway they never saw us—but the people in the office above them did, and held up a sign that said 'What are you looking at?! Call us!' It was great." —Jessica

"I had been hooking up with this girl who volunteered at my place of employment. She kept saying that we shouldn't see each other (she wanted a serious relationship and knew that wasn't going to be with me) but then we would see each other and one of us would propose a drink and we'd hook up again. This one time she was helping me close up. We started making out on the couches in the lobby area. I had to get something from my office and she followed me in and immediately reached for my belt buckle. I barely had time to get the curtains drawn before we were on my desk. Honestly it was magical." —Michael

"My boyfriend and I both worked in a theater and we hooked up in the booth when no one was attending a show. I always thought the idea was really hot...but I couldn't enjoy it because I kept thinking someone would walk in." —Lisa