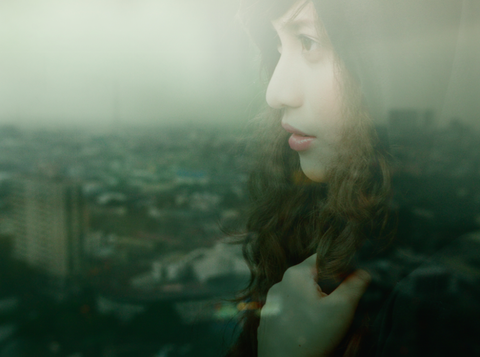 I ghosted my boyfriend of five years without thinking twice. I disappeared from his life and never said good-bye.

From the get-go, I believed Tom and I were more in love with our story than each other. It had begun in the Bronx, New York, as a childhood friendship, then turned into a teen and young adult romance.

We held on to that "high school sweethearts together forever" fairy tale no matter how contentious things got due to jealousy and competitiveness. From day one, we were jockeying for the lead position in the relationship. Tom usually won, as he had a much stronger personality than I did.

I allowed my resentment to build and, when I would get fed up, I'd break up with him. My stock would rise, he'd seduce me back, and I'd enjoy the upper hand; but it was only a matter of time before the jockeying would start all over again. I was either madly in love, or a young woman on the verge. But I just couldn't bring myself to walk away. The fairy tale was quite the aphrodisiac.

Both Tom and I stayed home for college, but attended different universities. I came into my own there, with new college friends, a part-time job in Manhattan (where I'd hoped to live and work eventually), and membership in the student chapter of a national organization for women in the field of communications.

This was the clincher for me. Having all these positive activities that made me happy made it glaringly obvious how unhappy I was in our relationship.

Because his major required a fifth year, we entered senior year together. Our highs and lows had drained me, and to re-energize, I threw myself into my new role as president of my communications club. When I wasn't putting together programs, chairing meetings, or representing my chapter at events with professional members, I wanted to be with my friends. Even though Tom and I didn't live that far from each other, our relationship had become relegated mostly to phone calls.

When we did see one another, you'd think we'd make the most of it, but no. We used the time to one-up each other.

When February rolled around, I wanted to call a truce for his birthday that was coming up later in the month. I said I would take him to a Broadway show, which he was totally up for.

The day I planned that errand, the weather was so inclement, I feared I'd never get into Manhattan, and if I got there, I wouldn't be able to make it back home to the Bronx.

It also happened to be Valentine's Day. As we were no longer lovers, I didn't expect a huge bouquet or heart-shaped box of candy, or even a card with a couple holding hands in Paris, but perhaps one with a humorous saying; a kind gesture to acknowledge not so much the holiday but the fact that I was going all out to acknowledge his birthday with expensive tickets.

Very late that evening he phoned and said, "Happy Valentine's Day," in an ironic tone, then got to the real point of the call: the status of his gift. I referenced the weather and said that when I was able to get them, I'd call.

I was very comfortable with just disappearing, as I felt we had already left each other. There was really nothing left to say. Rehashing old actions, which couldn't be undone, was pointless. I also knew that given our history, whenever I severed ties, he would guilt me into staying in the faux fairy tale, for no other reason—it finally dawned on me—than he didn't want to be the one who had been dumped.

Four months later, I graduated college. Shortly after that, I got a call from Tom to congratulate me. I congratulated him back. We never talked about my vanishing act or anything that happened during our relationship. We asked about future plans and were cordial, caring, and concerned, without a hint of flirtation.

Tom suggested we keep in touch, "You know, as friends, with Christmas cards." I agreed, but when the time arrived and he sent me a greeting, I couldn't return the gesture. I disappeared again, deciding my early life had no place in my present.

Years later, when connecting with childhood friends via social media, mature enough to put the past behind me, I searched for Tom, until a mutual friend broke the news that he had died.

Now I was the one who had to live with a ghost.