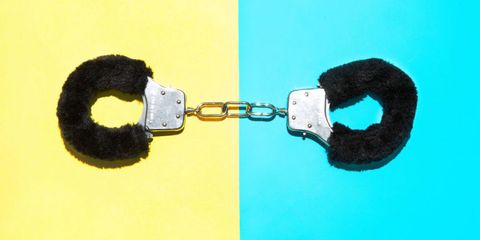 This May, a 20-year-old Texas man was charged with the 2014 death of his prom date, who didn't wake up the next morning after a night of allegedly "rough" sex. Though her death was exacerbated by the alcohol and hydrocodone in her system, Eddie Herrera choked Jacqueline Gomez while having sex, and, due to the drugs and "deep hemorrhaging" around her neck, she died in her sleep that night. Yet despite the inherent risks of engaging in increasingly physical sexual activity, our generation is clearly captivated by it.

In Pornhub's 2015 Year in Review, a comprehensive look at the search analytics of their users worldwide, one of the most interesting statistics went relatively unnoticed. Ranking just under "lesbian" and "solo male," women are searching categories like "hardcore," "rough sex," and "bondage" significantly more often than men. The "rough sex" category alone was viewed by women 106 percent more often than men last year. Under "top gaining searches" for both men and women, the term "hard rough" was searched 454 percent more often in 2015 than in 2014.

Are we getting kinkier?

What does "rough" or "kinky" mean to us?

In our discussion with millennial men and women on how they define "rough sex" (sex that may incorporate things like physical domination, spanking, or name-calling), these were some of the (pardon the pun) dominant themes:

If you spend much time on certain corners of the internet, "daddy" culture is a real, thriving thing. Appropriated from the gay community, "daddy" signifies an older man (or old-enough man) who's the dominant partner in the relationship. It's definitely trickled into the heterosexual realm, as indicated by the top five search results when you search "daddy" on Tumblr and, dare I say, Kylie Jenner's "Come to Daddy" T-shirt.

Emily, 24, and Brian, 22, are a couple who have explored this fantasy dynamic in their relationship. "We have rough sex sometimes, but it's usually more psychologically rough, like me being dominant in a 'motherly' way. There's nothing physically rough about it, but he's asked me to say some pretty mean things to him," Emily says.

Brian agrees that it doesn't have to be physical to be rough. "I think people are generally ignorant of just how kinky everyone else is," he says. "I was afraid of leaving my high school girlfriend because she was the only person I told about my mother/son fetish, but I've had a handful of partners since then indulge me in that. I'm into ... the idea that I'm not good enough to satisfy her."

Lack of Consent and Education

But for some millennials, (including yours truly), light choking and hair-pulling are pretty standard bedroom play, and don't necessarily constitute rough sex by themselves. "Hair-pulling isn't very rough to me and can be part of non-rough sex," says Mark, 29. He considers bondage, whips, and pain play to be rough, but draws the line at choking. "Choking is next-level shit to me," he says. "I can't even see that. But I have enjoyed [rough sex] when I feel the idea was broached respectfully with me."

Whether or not millennials, more so than previous generations, are playing rougher in bed is debatable, and when "rough" means so many different things to different people, asking for consent becomes even more crucial.