Today's Top Stories
1
How to Donate Money for COVID-19 Medical Supplies
2
Sweatpants You Can Wear From the Couch to Brunch
3
'Killing Eve' Season 3 Review: What's Old Is New
4
Easy Ways to Look Better In Your Next Zoom Call
5
The Struggle to Get an Abortion During COVID-19
Marc PiaseckiGetty Images

If you haven't had a chance to look at Lady Gaga's Instagram, I fully suggest you take the time to do so. It's fine, I'll wait.

Ready? So...Are we going to talk about what's going on here? Does anyone even know where to begin to talk about this? Would I look good with a warped beak-nose? Is it possible to be "scared sexy," because I'm pretty sure that's the best way to describe the 18-and-counting photos of Lady Gaga on her Instagram page.

The photos are rumored to relate to the singer's upcoming Las Vegas residency, Enigma, and the first set of images appeared on August 15, featuring Gaga with a wolf mask, distorted limbs, and a mouth that can only be described as a more-exaggerated version of Edvard Munch's The Scream. Enigma also serves as an appropriate title to describe the photos on her Instagram, which are accompanied solely by a photographer credit. But this is only a rumor—fans have been speculating for weeks what these photos might mean. A possible return to American Horror Story? A new album? A Joanne redux?

Something related to body image, like one fan speculates?

Do you guys see what she’s doing here? They represent the things she’s been mocked for the most. The ambiguous genitalia, her nose and her weight.

The credited photog is Eli Russell Linnetz, the 27-year-old photographer who was also behind that NSFW Yeezy campaign from June, as well as Shawn Mendes' video for "Nervous." Considering that video features Mendes and disembodied hands, it's safe to assume that Linnetz isn't afraid to make the viewer uncomfortable with his art.

The photos range from frightening, stylized Cindy Sherman-esque portraits to less formal, more relaxed-but-still-NSFW in the more recent images. One photo is just some blonde hair on a white background.

Lady Gaga has been more conventional as of late—coming off her starring turn in the upcoming remake of A Star is Born—but it's nice to be reminded that she's still the meat-dress-wearing, hair bow-originating, musical genius and weirdo I always knew she was. You do you, Gaga! 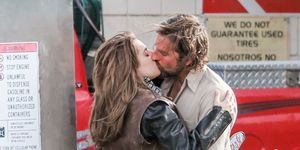