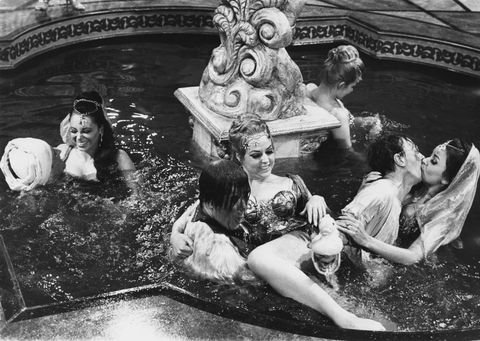 I like to say that my book forced me to do it: Attend a sex party (sometimes called “play parties”) in the name of research. My new novel, The Bucket List, follows a 25-year-old woman named Lacey Whitman, who finds out she has the BRCA1 gene mutation, the breast cancer gene. In an effort to decide what to do—continue ongoing surveillance or take the more radical step of a preventive double mastectomy—Lacey and her friends create a “boob bucket list” of all the things she wants to do before (possibly) saying ta-ta to her tata’s.

Her raunchy bucket list included many things that I, myself, hadn’t done, and therefore wouldn't be able to write about in an authentic, believable way. So in the dead of winter, my girlfriend and I bought tickets to a play party at a popular, progressive venue in Brooklyn, New York. Work, right?

Sex parties run the gamut, from tame to XXX-rated. The one we signed up for was closer to the PG-13 end of the scale, where sex was permitted but not necessarily expected. Our fete of choice promised “a dance party and sensual experience.” The way we translated this? A night where it’s okay to hook up (and then some) with your partner and/or other people in public. Neither my girlfriend nor I had been to anything like this before and, while we’re both open-minded about sex, the extent to which we've added more people in the bedroom ends at watching a steamy scene on The Americans.

As the date drew nearer, our excitement rose—and so did our anxiety. Were we entering into our very own Eyes Wide Shut? What, exactly, were we up for? Ultimately, while we both decided we were open to something happening with another person or persons, it would have to be discussed in the moment. It was hard to come to any hard-and-fast rule about something so foreign to us. We value our monogamy, but we’re also aware of the difficulty of it, long-term. For us, emotional fidelity is more important than sexual fidelity, but even so, the idea of opening up our relationship even a tiny bit scared me. I suppose the ideal situation might have been meeting another newbie couple like us, and making out in a dark corner: an eight-armed, mutually satisfying pleasure monster.

In reality, we weren’t in for too many surprises. But I did learn a few things about the experience—and myself.

1. The vibe was more “costume party” than “sex party.”

After getting dressed...and then getting tired, because it didn’t start until 10 p.m....and then getting revved up again because maybe we were about to not be monogamous anymore, we found a long line of people stretching down the block of an industrial neighborhood.

Everyone was in costume (it was mandatory for entry) but the theme seemed amorphous, likely because there was no theme. There were plenty of fishnets and light-up headbands and heaving cleavage. One guy was dressed as Waldo, of Where’s Waldo fame. Another couple came as a 1970s disco king and queen, in bell-bottoms and rollerskates. It looked more like a dress-up party than a sex party: Burning Man in Brooklyn. And that eclectic vibe, I realized, is because...

2. Everyone has a different interpretation of sexy.

One of the cool things about this experience was seeing such varied visual representations of what’s sexy to different people. For some people, exposing flesh puts them in the mood. For others, covering it up does the trick. In such a short amount of time, I’d never seen such a wide range of people’s turn-ons.

3. Organizers want to make sure you have a good, safe time.

“No photographing nudity,” called a woman at the front of the line, in a way that made it seem like she'd been shouting these same directions all night. “Don’t assume consent for one activity means consent for all,” she added. Though there weren't hard-and-fast rules posted anywhere, it was clear that the organizers wanted us to know that consent was capital-I Important at this event so that it could be fun for everyone. My girlfriend and I exchanged a nervous/excited glance and joined the end of the queue behind a drag king and a couple of guys dressed as sailors.

4. It’s easier to deflect interest at a sex party than at a regular bar.

Inside, a man dressed a drug kingpin sidled up to me and cooed, “You’re beautiful.” This appreciation was not mutual, so I turned away and focused on a go-go dancer in a cage. Sure enough, he melted off and went to chat up a woman in a glittery bikini top.

The thing was, I found it easier to turn down unwanted male attention at a sex party than a regular bar, where a simple “no thanks” can often be the beginning of what he thinks is a negotiation. Perhaps this was because there were so many volunteers with “YES” in block letters on their T-shirts milling around—ready, I assume, to ensure everything going down was consensual. I got the sense they’d 86 you for an unwanted high-five. They had the curious effect of making me feel both safer and more controlled, bringing to mind watchful chaperones at high school dances.

For the next few hours, we saw a great band, admired the acrobatic go-go dancers, and had a few drinks. We didn’t see any actual sex until late into the night, while we were hanging out by the pole-dancers. In a dark corner, a drunk guy was trying to get a drunk girl to give him oral sex. He kept moving his crotch in front of her face as she kneeled unsteadily in front of him, but her head lolled back like her neck was made of taffy and she couldn’t keep her balance. Was it sexy? Definitely not. Was it consensual? That seemed impossible.

No sooner did we spot this than my girlfriend got to her feet to alert the volunteers. She’s always loved telling people to stop breaking the rules, and apparently that habit extends even to sex parties. Seeing this kind of gross hook-up was a vibe-killer for us. After all, consent isn’t just sexy, it’s non-freaking-negotiable.

6. Hooking up in a public setting isn’t for me.

Ultimately, this kind of party just wasn’t my jam. As a femme-presenting lesbian, I’ve learned the hard way that, all too often, my sexual expression is interpreted as an invitation by douchey straight men (think: a lot of unwanted eye contact, cat-calling, or the odd arm slung around me, the latter of which generally triggers a rage meltdown). I still don't always feel comfortable holding my partner’s hand in public, and kissing (or more) at a play party didn’t make me feel turned on, it made me feel a bit uncomfortable. There was nothing wrong with this party, specifically, it just turned out that, personally, public sex wasn’t a terribly sexy prospect.

7. Trying new things with your partner keeps the relationship interesting.

Of course, I don't mean to suggest I didn’t enjoy dipping my toe in the kinky sex water. The band was awesome, the pole-dancing was fun, and all the costumes made the whole thing feel like a Mardi Gras parade. The best part was that it was a bonding experience for my partner and I, because we could test our limits together.

I’m so glad we tried this, even if it isn’t something we’re planning on doing again. Firstly, this party was pretty tame as sex parties go (I’ve been told other parties are pretty much just sex) and the babysteps of it all worked for me. Diving right into an XXX-rated sex party might’ve made me feel less curious and more anxious, whereas this one ignited some fruitful conversations about our rules as a couple, and the excitement of the event built up for weeks beforehand. We loved getting dressed up for it, and it added frisson to our relationship in the weeks prior.

For us, the real pleasure of the play party culminated before the event. Sex is so often reduced to the physical act of getting it on. But really, it’s the lead-up, the teasing, the anticipation that end up being some of the most exciting aspects.

8. Sometimes fantasy can be better than the real thing.

One thing I realized is that I really enjoy writing about sex that's different than the sex I'm having. Imagining and researching experiences that are exotic to me can be liberating, in a way. In The Bucket List, Lacey explores a variety of sexual encounters that I will likely never have personally. But boy, did I enjoy writing about them! The sex we read about or think about or write about or even talk about doesn’t need to reflect what we actually do. Fantasy is, in itself, a form of sexual freedom.

So if you’ll excuse me, I have an episode of The Americans waiting for me.

Related Story
19 Must-Read Books for the Beach
This content is created and maintained by a third party, and imported onto this page to help users provide their email addresses. You may be able to find more information about this and similar content at piano.io
Advertisement - Continue Reading Below
More From Love & Sex
44 Cute Gift Ideas for Couples in a LDR
15 Couples on How 2020 Rocked Their Relationship
Advertisement - Continue Reading Below
Fun, Low-Key Ideas for a First Date
Satisfyer Vibrators Are Under $40 for Prime Day
Real Women Share Their Favorite Sex Positions
My Abuser Cyberstalked Me
Swipe Right on Privacy
The All-Time Best Vibrators, Reviewed by Experts
Behold: A Sex Playlist That Won't Make You Cringe
The 60 Best Cheap Date Ideas