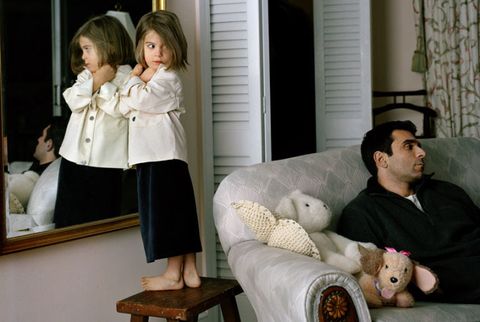 When I was 19 years old, I ran into my father in a London department store. We hadn't spoken in years, but when I heard that laugh, I knew exactly who it was. There we stood, six feet from each other, but we said nothing. He looked me over like he was checking me out. I dropped my shopping bags and ran behind a knitwear display before collapsing on the floor, nauseated. My own father hadn't recognized me.

My parents divorced when I was 6, and after that, my father virtually vanished from my life. When I was 12, he relinquished all parental rights so he wouldn't have to pay child support. His desertion created a void that inevitably left me feeling unloved and insecure. After all, if your dad doesn't love you, why should anyone else?

As a teen, I transferred those feelings of inadequacy to my relationships with guys. I'd dump boyfriends quickly, scared that if I didn't, they'd beat me to it. When I got to college, my insecurities took on a more passive form: I'd stay with men who did drugs and cheated on me. There was one nice guy in the mix: Russell, whom I met on spring break my senior year. But we eventually returned to our respective schools, and I met another man, who became my first husband.

Toby was a film producer whom I flirted with at a nightclub, and I was enamored by his wit and ambition. We married when I turned 24 and settled down in London. But after the wedding, the relationship began to unravel: It seemed I couldn't do anything right in my husband's eyes, and he was quick to criticize. And being my passive self, I'd just suppress my feelings. After five rough years, we divorced.

At 29, I realized that although my father was not a part of my life, the effects of his abandonment cast a shadow over it: My insecurities had made it impossible for me to have a healthy relationship with a man, but I didn't know how to change. Ironically, as my marriage fell apart, my career picked up —I got a job as the editor in chief of OK! magazine in New York City. So I moved to the U.S. and swore off men for a while. I wanted to build my confidence before trying to date again.

New York was just the first stop. I decided to see the world on my own. First I booked a shark-diving trip to Bora Bora. While treading water in the Pacific Ocean with dozens of deadly creatures darting around me, I felt fearless. Then I headed to Tulum, Mexico, for a meditation retreat, where, sitting cross-legged under the bright stars, I was calm and centered for the first time in years. I made a pit stop back home, where thanks to the perks of my magazine job, I sat on a judges' panel at the Miss America pageant. It was there, among the 52 singing, dancing, baton-twirling hopefuls, that I discovered my silly side again. A fellow panelist, a well-known self-help guru, encouraged me to write a list of traits I wanted in a husband and stick it to my fridge as a reminder.

A few months later, I decided to hike Machu Picchu. As I sat alone above the world, watching the sunset, I gazed down at the red rivers rushing through lush fields at the base of the ancient Inca temples. I felt small and insignificant, and for the first time, so did my problems. The world was suddenly too complex to comprehend, and it seemed pointless to blame myself for my father's actions. I descended the ruins feeling confident that I was deserving of a healthy relationship.

Shortly after returning to New York, I received an e-mail from Russell, my fling from years ago, who was living in Louisville, Kentucky, working at a software company, and had heard from a mutual friend about my divorce. We spoke for three hours on the phone and began a long-distance relationship. Over the next few weeks, I fell in love with his honesty, kindness, and emotional strength —qualities that until then I hadn't known in men. Six weeks into our relationship, Russ proposed. We married soon after in England, I moved to Kentucky, and we now have a baby son named William.

Staring at my helpless little son, I finally understand that as a child, I didn't make my father leave. He was responsible for his choices —just as I am for mine. In choosing to release the past, I've healed myself and created my own family and a future filled with love.