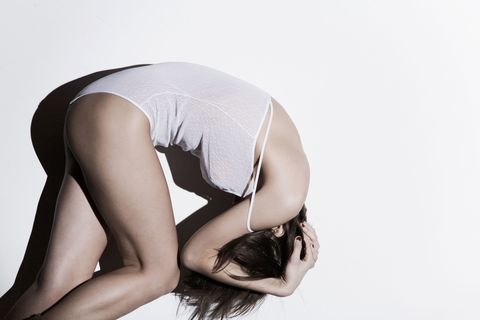 Any breakup—whether it was the slow unraveling of a seven-year marriage or the sudden crash of a six-week fling—can be majorly taxing on both your emotions and your health. Of course, not all conscious uncouplings push people to snuggle a bottle of Ketel One during a 3 A.M. Blue Valentine viewing, but lots do, which is why the Concerned Friend usually tells the Newly Single Person some version of "take care of yourself," implying: get enough sleep, eat well, watch your substance use (/abuse). But what about the other stuff, the sneaky health consequences brought on by the end of a relationship, the ones that can creep up on you like ... well, a breakup? Below, we explore seven of these physiological reactions that can start the second a couple calls it quits, from the minor (blood pressure spikes) to the somewhat major (broken heart syndrome).

#1. Your brain registers real feelings of pain, and real cravings for your ex.

Nope, it's not just a figment of your imagination: Your brain really can fire off pain synapses when you're going through a breakup. A 2010 study published in the Journal of Neurophysiology found that when people are shown pictures of their exes, activity is induced in the part of the brain that also registers physical pain. Likewise, a 2011 study by researchers at Columbia University showed that when you are going through a breakup and feel like you are missing your significant other, it really is a craving: The areas in the brain that become active are the same ones that kick in when cocaine addicts are experiencing physical pain and withdrawal. Finally, a 2013 study published in Psychological Science showed that acetaminophen, the active ingredient in many over-the-counter pain medications, also "reduces the pain of social rejection at both neural and behavioral levels" that people feel after being dumped. So, pass the Tylenol please?

Yep, fight-or-flight is a real thing—the biological phenomena that has your body dispatch massive levels of the stress hormones adrenaline and cortisol in reaction to threatening or stressful occurrencesis a real thing. But it can actually do more harm than good when it kicks in and you don't really "need" the biological responses, your body is suddenly producing. The consequences are wide-reaching, like sore, swollen muscles (caused by the cortisol building up but your muscles not actually springing into action more than normal afterwards) and an increased heart rate (caused by both adrenaline and cortisol).

#3. Your digestive system slows down.

Again, your hormones are to blame: "Cortisol shooting into your system during your break up diverts blood away from your digestive track, leaving you with GI [gastrointestinal] unpleasantness," explains MSNBC's Jennifer Nelson. And according to a 1994 study, stress can even affect the distribution of fat, since cortisol promotes the settling of fat particularly in your abdominal region. Greattttt.

#4. Your skin is more prone to breakouts.

Sure, lots of things cause acne. But in a 2007 study celebrated by The New York Times for its methodology, researchers were able to control for many other acne-causing factors (like weather, by studying people who live in Singapore, where the climate rarely changes) and show that stress really does cause acne. Their findings? Breakouts were 23 percent more likely to happen when people were experiencing high levels of stresslike, say, during the dissolution of a romantic relationship. (Basically, breakup=breakout ... or at least that's more likely.)

This one's pretty cut and dry: Stress is a significant cause of hair loss, and breakups are often very stressful things. So, while we all know breakups are famous catalysts for dramatic hair transformations (see: Reese Witherspoon's post-Ryan Phillippe bangs, Evan Rachel Wood's post-Jamie Bell red dye job), trims and lobs and platinum dye-jobs aren't the only things to look out for. If you're noticing more hair piling up in the shower drain than usual, check your stress level. And then maybe schedule a salon appointment to get that dramatic hair transformation you're itching for anyway.

Don't worry too much about this one: As the American Heart Association explains, while "blood pressure may increase temporarily when you're stressed, stress has not been proven to cause chronic high blood pressure." Still, even a short term increase in blood pressure can be a problem for people who already have high blood pressure, as it could push them into what's called a hypertensive crisis, when severely elevated blood pressure causes symptoms like headaches, shortness of breath, and even nosebleeds.

It's not a joke: The American Heart Association explains that when stressed, like when dealing with a broken heart, sometimes "a part of your heart temporarily enlarges and doesnt pump well, while the rest of your heart functions normally or with even more forceful contractions," which "can lead to severe, short-term heart muscle failure." This condition is technically called stress-induced cardiomyopathy, but it's so commonly referred to as "broken heart syndrome" that basically any doctor will know what you mean if you say that. The good news? It's usually treatable and it's usually something people only experience once. And it's also extremely rare. While it hasn't been diagnosed in the States since 1998, a 2014 study by Japanese researchers estimates broken heart syndrome only accounts for around 2 percent of people who show up at the hospital with acute coronary problems. The bad news? That same study shows it's way more likely to affect females, with women accounting for over 80 percent of cases.

As a nod to splitting season, ELLE.com is tackling everything from the most memorable celebrity uncouplings in history to the least painful ways to break up with people you're not, technically, dating. Today, on day 3, we explore the physiological effects of breakups.