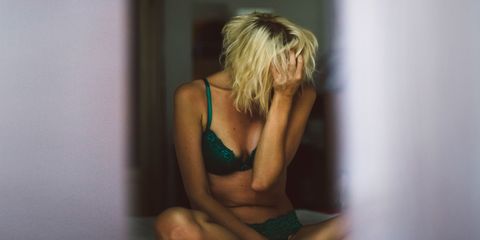 For many reasons, it's cogent to say that women today have it a whole lot easier than our mothers' generation did. We have burgeoning careers and we aren't ashamed about earning—and spending—our own money. Most of us have grown up with access to birth control, as well as the freedom to talk about sex with our parents, our friends, the internet—really, anyone will listen. There are enough dating apps to satisfy just about any kink, and casual hookups are no longer taboo. Oh, and our sexual orientation doesn't need a label anymore. But just because society now recognizes women as fully functioning, independent humans (or at least, most of the time society does), it doesn't mean navigating the world of sex and relationships is less messy, or always freeing, for said modern woman. In this increasingly progressive landscape, I asked ten women to explain what stresses them out—specifically, the situations and emotions their parents didn't have to deal with—and why.

Should I send my boyfriend naked pictures?

"I feel most conflicted about sending my boyfriend naked pics. This is something I hear so many of my friends talk about doing (and their boyfriends reciprocating), and it seems like a really important part of many relationships, but I have never done it, and I don't really want to. It makes me feel like a bit of a prude?"—Stephanie, 24

Is my pharmacist judging me for getting Plan B?

"I took Plan B for the first time a few weeks ago. I get to Walgreens, make my way to the checkout counter, and hand the woman the Plan B which is packaged in one of those impossible-to-open plastic security casings. The woman, exasperated, says out loud, 'Not another one of these!!' Already defensive, I translate her comment to mean, 'How many more slutty 20-something almost-mother-to-be's do I have to deal with today?' and so I sigh loudly with embarrassment. But as she furiously begins to tear into the security packaging, I realize she is actually annoyed with the medicine's protection and not the lack of mine the night before."—Fiona, 25

I'm not going to finish, so can you just stop trying, please?

"I think it's really great that guys seem more aware of and dedicated to the female orgasm but sometimes it's just not happening and then they stay down there forever and I start daydreaming about cheeseburgers."—Sarah, 25

I know that I don't need a reason to *not* want to have sex, so why do I still feel compelled to come up with a lie?

"One time I went home with a guy who was a friend of a friend. We didn't really know each other. He kept asking me if we could have sex, and I kept saying no. Then he demanded a reason why I didn't want to. I didn't need to have a reason! Nevertheless, I felt pressured to give one and blurted out, 'I just got out of a long distance relationship!' My discomfort, probably with being a 21-year-old virgin, caused me to tell a nonsensical white lie to a stranger."—Kiki, 25

Does my girlfriend want to be in an open relationship?

"I'm in a sexually gratifying relationship and it's great. But instead of feeling satisfied with that, I dread the day that things get stale and one of us, or both of us, starts to wonder and wish that we could sleep with other people. Now that varying forms of monogamy and commitment have entered the mainstream conversation and people are talking about open marriages and whatnot, I worry about what that means for my own relationship and whether I can satisfy my partner."—Rachel, 26

Why do I still feel like I shouldn't sleep with someone on a first date?

"The difference between hooking up and dating people is just so very real. This is my first time being single in 'the real world' and it's very confusing. Why is it socially acceptable to hook up with someone that you just met at a party but it's not okay to hook up with someone after a first date if you're actually interested in a future with that person?"—Joanna, 24

Have I not slept with enough people?

Is it wrong that I just want guys to know how to get me off?

"Most men now make a valiant effort of being attentive to my needs, so guys will ask me 'what to do' and quite frankly, I don't know what to do! I can do it myself but I don't have a map for you. Sorry."—Nicole, 24

How do I keep my relationship sexually exciting while staying true to what I want?

"I've been in a relationship with one person for 7 years, so we are already having the conversation about keeping things fresh and exciting. But I'm only 24! We're both so young but I'm concerned that our sex life will become boring, so I want to have that conversation honestly. But am I crazy to be worrying about that already?"—Brett, 24