Today's Top Stories
1
Could This Be the Last Year of Roe v. Wade?
2
What to Buy From Madewell's Secret Stock Sale
3
The Inaugural Concert Was a Cheesy Balm
4
Jaclyn Rothenberg Pursues Pantsuits In Every Color
5
Listen to the Best New Love Songs of 2021 (So Far)
Getty/Twitter @jeffreestar

Kylie Jenner and Jeffree Star have had a very off-and-on relationship. Back when the reality star first launched her makeup line, Jeffree slammed her for overcharging for her Lip Kits. Eventually, they ended up burying the hatchet and Jeffree even praised her velvet liquid lipsticks.

But Shady Jeffree has taken the reins again, and over the weekend, he went on a brutal Twitter rant, shading everything from Kylie's new brushes to her concealer collection. 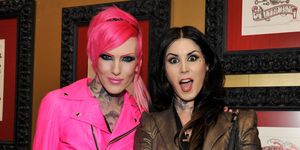 It started with J.S. wondering why the new silver brushes come with a $360 price tag. (But really, though??)

Then, he came for her concealers in a tweet that has since been deleted, accusing her of copying his lipstick packaging.

Kylie hasn't responded, but Jeffree is unbothered regardless.

Kelsey Stiegman Senior Style Editor Kelsey is Seventeen.com's fashion expert and resident Harry Potter nerd.
This content is created and maintained by a third party, and imported onto this page to help users provide their email addresses. You may be able to find more information about this and similar content at piano.io
Advertisement - Continue Reading Below
More From Beauty
Dazzling Makeup Looks From the Spring Runways
Michelle Obama's MUA Talks Her Inauguration Look
Advertisement - Continue Reading Below
24 Hours With Nail Artist Naomi Yasuda
You Need This Kamala Harris-Inspired Lipstick
Acne Scars Are No Match For These Cult Products
Lengthening Mascaras for Your Longest Lashes Ever
Why Resoré's Body Towel Is Worth It
The Best Supplements for Glowing Skin
Hair Dryer Brushes Will Change Your Blowout Game
A Dermatologist's Guide to Ferulic Acid