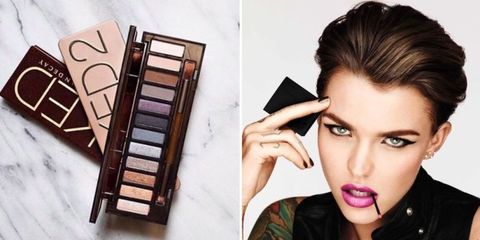 It was only days ago that Urban Decay released a new eye shadow and liner vault in honor of their 20th anniversary, and already the brand has more news to share: They've just signed Ruby Rose as the new face of the brand.

An Urban Decay rep explained why the brand and the edgy actress are the perfect union: "Everything Urban Decay does is feminine, dangerous, and fun—and with her badass look, f***-it attitude and playful spirit, Ruby nails what that means to us."

And the feeling is mutual. Ruby said in a statement, "Urban Decay believes in supporting individuality and personal self-expression—two values I hold very dear—because everyone deserves the freedom to explore their personality and discover their true selves." Well said, Ruby, well said.

So, what can you expect out of this beauty as the face of Urban Decay? The beauty brand wouldn't confirm if she'd have her own products within the line, but for now, Ruby will be "spreading the gospel of 'beauty with an edge' around the world."

That said, they did hint at the possibility that this partnership could be bigger than they initially led on, saying, "We've waited 20 years to do something like this—patience is a virtue. We'll share more when we're ready!"

Until further notice, Urban Decay, we'll all be sitting on the edge of our seats.

Carly Cardellino Carly Cardellino was the beauty director at Cosmopolitan.
Advertisement - Continue Reading Below
More From Beauty
Hailey Bieber's Beauty Routine Is So Simple
Facts to Know Before You Get a Keratin Treatment
Advertisement - Continue Reading Below
The 3 Lipsticks I Have In Rotation Right Now
Why Using a Product With Peptides Is Worth It
Created for From Marie Claire for Created by Marie Claire for
StriVectin Peptight
Line Edit: Eyeliner Trends That Are High Drama
Black-Owned Beauty Brands You Need to Know
The Body Lotion Your Dry Skin Has Been Craving
Know the Signs That Your Makeup Has Expired
Kendall Jenner Has Rapunzel Hair On 'Garage' Cover
WORTH IT: Royal Fern Skin Perfecting Essence