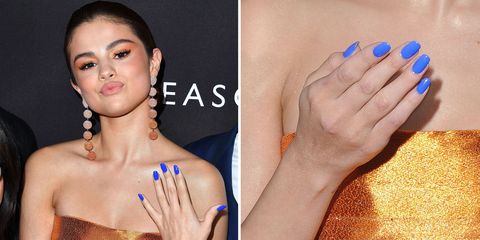 Selena Gomez stunned on the red carpet of her new project, Netflix's 13 Reasons Why. Her orange metallic Oscar de la Renta gown, Rebecca de Ravenel earrings, and colorful eyeshadow were a master class in matchy-matchy, but the real pop of color came by way of her nails. Her manicurist Tom Bachik shared pictures of her shiny cobalt tips on Instagram, racking up hundreds of comments inquiring about the exact color. His response? Watch Gomez's new show on Netflix to find out. We did the work for you, and here's what we learned (no spoilers, we promise).

The shade Gomez is wearing is Sinful Colors Endless Blue, and the polish only costs $1.99. While blue and orange happen to complement each other perfectly, she chose the shade because it has a deep, emotional significance to the plot of 13 Reasons Why. Based on a novel by the same name by Jay Asher, the story follows a teenager named Clay Jensen who tries to uncover the reason his classmate Hannah Baker committed suicide. The only clues he has are 13 cassette tapes recorded by Hannah that detail her side of the story. And those tapes? They're labeled and numbered in blue nail polish—the same bold color Hannah was wearing on the last day of her life.

You catch a glimpse of the Sinful Colors bottle early on in the series during an emotional scene with Kate Walsh, who plays Hannah's mother. It's clear Gomez, who served as the show's executive producer, was sending a subtle—but important—message about just how much this show really means to her through her nails. "Our show @13reasonswhy came out tonight and I couldn't be more overwhelmed with pride and joy," Gomez shared on Instagram. "After 7 years of holding onto this book, I couldn't of picked a better time for this message to exist."