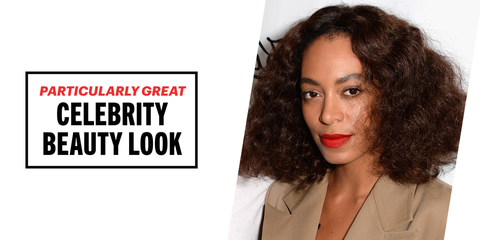 For a woman with such a clear-cut fashion M.O. (color-blocking or monochrome, strong shapes, coolness out the wazoo), Solange never ceases to subtly switch up her beauty game. Take her look at last night's Kiehl's even-timelier-than-anticipated Pride Week celebration:

We've seen her wear similar orange-red lips in the past, but 1) do you ever get tired of it? and 2) this is *actually* a departure from the times before. (This would be the part where I crack my knuckles if I didn't think that was gross and if I could, you know, crack my knuckles at all.)

First, the skin, which looks bare and dewy but might have been patted with something thin and BB-creamy that comes in a fun cushion compact. "Powdery" isn't a word that would make the top 57,362,423 adjectives to describe Solange, but here, she's gone more natural than ever, embracing the sort of summery sheen no mere blotting paper can tamp down. (Except maybe those gold-threaded ones geishas used, but that's beside the point.) Then, of course, we've got the lush matte lips—the one and only "done" element that suddenly makes the entire face evening appropriate.

Throw in a less defined eye than we've seen in the past, combed-through brows, and soft, cumulus-cloud curls, and you've got...Solange at her Solange-iest. *sigh* Results are not guaranteed, but a tube of Lime Crime in Red Velvet certainly couldn't hurt.

Chelsea Peng I'm Chelsea Peng, the assistant editor at MarieClaire.com.
Advertisement - Continue Reading Below
More From Beauty
100+ Chic Haircuts to Add to Your Mood Board
Our Guide to Finding Your Perfect Nail Shape
Advertisement - Continue Reading Below
In Her Own Words: Halima Aden
Beauty Editors Share the Best Products for Acne
Easy Homemade Face Masks for Glowing Skin
#BigLipstickEnergy: The Cult Classics Edition
Editors' Picks: Face Rollers That Work
The Chicest Lobs That'll Look So Good on You
What to Buy at Ulta's 21 Days of Beauty Sale
The Best Eye Creams for Getting Rid of Puffy Bags