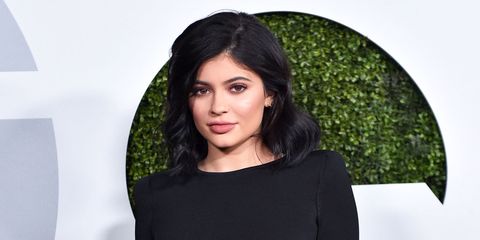 Kylie Jenner is no stranger to taking a picture of herself, but perhaps none carry quite as much weight as her newest.

In a new Instagram photo snapped on set, Jenner—clad only in slippers and a white terry cloth robe—showed off her left leg, with particular attention paid to a long scar down her thigh. Captioned "I love my scar," it was a statement in and of itself—and a reminder that celebrities are people too. (In a 2011 interview with Celebuzz, Jenner revealed that she got the scar after hurting herself during a game of hide-and-seek with Kendall when they were kids.)

I love my scar

Scrolling through the comments on the image, the responses range from body-positive praise to straight up bullying. (The latter of which is an issue so close to Jenner's heart she even started her own anti-bullying campaign #IAmMoreThan.)

Being the social media savant she is, Jenner has seen the good, the bad, and the ugly from her 44.5 million followers and could've easily foreseen backlash from trolls. The fact that she uploaded her scar tissue anyway? Admirable. Below, find the most *inspiring* comments:

Lauren Valenti Associate Web Editor I’m the associate web editor at Marie Claire.
Advertisement - Continue Reading Below
More From Beauty
The Must-Have Products for Air-Drying Your Hair
16 Super Pretty Valentine's Day Makeup Tutorials
Advertisement - Continue Reading Below
Ashley Benson's Bob Just Got a Major Makeover
Editor-Approved: The Best No-Streak Self-Tanners
Pat McGrath's New Lipgloss Is Everything
Selena Gomez Looks So Different With a Curly Lob
How to Give Yourself the Quickest Mani Ever
Nailed It: The Ultimate Guide to a Better Manicure
Do You Have Trash Nails?
The "Clean" Nail Polish Guide