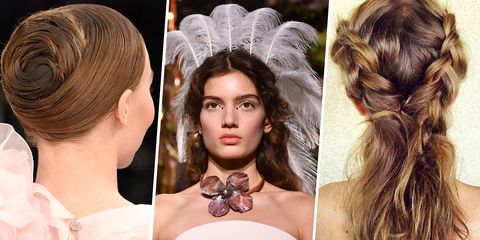 "You can never regret your wedding hair if you don't try anything more exciting than a low chignon," the meme that doesn't have a name (that we know of) would say. But to that, *we* say "Boooooring. Also, false." No claim goes unsubstantiated around here, so straight ahead, 10 styles for making pleasant follicular memories your kids won't roast you for 10 years later.

Advertisement - Continue Reading Below
1 The Lizzie Bennett If She Cared

Not a low bun—a low braid tied with a trailing little-girl ribbon, as seen at Schiaparelli couture. Could pair well with loads of dress styles, but would be extra romantic with something period-y (as in "old," not "menstrual"). Plus everybody looks extra beautiful with a headband, as it frames the face.

For non-editorial situations, maybe take down the frizz a bit, but definitely keep purposefully disheveled, loosey-goosey vibe. Really good with a strapless or off-the-shoulder neckline, bushels of fresh-cut flowers, and the highest-clarity, clearest-colored diamonds for contrast.

Apologies to Sam McKnight and his creation for Chanel couture, even though it definitely does resemble the rump end of a really well-laminated pain au chocolat. Very into the the idea of an extremely done, extremely epic up-do, because if not on your big day, then when? Just no prom ringlets, please.

Disclaimer: Not the best for a church affair, though could be fun in a sacrilegious Alexander Wang Fall 2016 sort of way. But if your moodboard has images like the Marrakesh leg of Poppy Delevingne's nuptials, pink-streaked raver buns could be the exact rock 'n' roll complement to your bespoke Pucci dirndl gown.

@adirxleletny mixed metals hair accessory line is available for purchase NOW at @leletny (link in my bio)! Enjoy my loves ♥️This has been such a beautiful adventure and I'm so excited to share it with you all #adirxleletny #mixedmetals #leletny #collaboration #hairaccessories

From Adir Abergel, the visionary behind the braid chain, comes another excellent use of his accessories range with Lelet. Take one (1) pretty half up-do, and add chains until it's positively dripping. Lovely.

While we're on the subject of half-up styles, here's one from Georges Hobeika couture that combines the cleanliness of a slick-back with the security of still having hair resting on your neck. With that tiny knot sitting just under the curve of the skull, you get a gorgeous profile, especially if you're wearing earrings you twisted a lot of arms to borrow.

With the right texture, you won't even need assistance. (With less or no texture, you'll just need some product to add grit.) Center part, Dutch braid each half (under, not over), and connect in the back with strong pins. Then imagine all the twinkly things, like a coronet, you could tuck in there.

Listen: A headdress doesn't have to be campy, nor does it need to be surrounded by a midnight masquerade ball à la Dior couture. (Wouldn't hurt, though.) All you need to carry it off is a vision, some élan, and the knowledge that flower crowns might have been ruined by the festival industry, but that doesn't mean they can't be incredibly elegant if you think more Queen Victoria than cover band that does a lukewarm "Under Pressure."

Nobody would blame you if at least half your beauty-inspiration pics were Valentino, but I might question your taste a little if this puzzle-like low pony weren't included. Deceptively complicated, you can see that it's really just some clever, symmetrical parting and metal bands that, together, give off a medieval, maidenly effect.

For Carolyn Bessette-photo-pinning, ivory-slip-dress type brides, I really love the idea of a wedding cut—not so drastic that your guests are like "um, did I read the invite wrong?" but planned out far enough in advance (two weeks is good) that you've still got crisp lines and that post-scissor smoothness no product can achieve. And it makes you feel like a Prada exclusive! *And* if you go for a rumpled bob or just a refresh of your Life Cut—something that you are certain suits you—you'll never look back on the pics with regret.

Chelsea Peng I'm Chelsea Peng, the assistant editor at MarieClaire.com.
This content is created and maintained by a third party, and imported onto this page to help users provide their email addresses. You may be able to find more information about this and similar content at piano.io
Advertisement - Continue Reading Below
More From Beauty
A Dermatologist's Guide to Ferulic Acid
Editor's Pick: Our Favorite Hand Soaps
Advertisement - Continue Reading Below
Soothe Your Dry Palms with These Luxe Hand Creams
Sephora Collection Just Launched a New Foundation
Keratin Treatments You Can Do At Home
How Marie Kondo Does Self-Care
Kick Off 2021 With A New Fragrance
Layered Haircuts For Every Face Shape
The Anti-Aging Products Derms Recommend
Behind the Scenes With Bridgerton's Wig Team